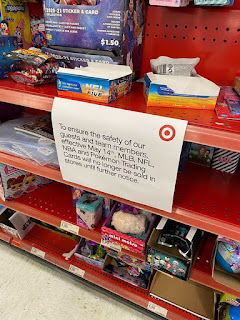 Because this is a World where we can't have nice things without people messing it up, Target will be halting its sales of trading cards (in-store) as of May 14th. This seems like it will for sure apply to Pokemon cards and sports cards, maybe Magic and other stuff too. This comes on the heels of Walmart planning on stopping selling these trading cards in-store due to how it has just caused a lot of arguments, fights, and disruptions. A Wisconsin Target had an incident recently in the store's parking lot where a man pulled out a gun and threatened others over sports cards. Now, people can still buy cards online or at dedicated comic and game stores, but some regions lack these kinds of physical locations (with buying via the internet sometimes being a battle against bots too).

I'm not actively involved in collecting trading cards associated with any games or sports but have friends who are and when they can't get to a store dedicated to cards Walmart or Target was useful for them. Now they'll lack that option due to people being extra stupid lately about cards and trading card games. It is such a shame.