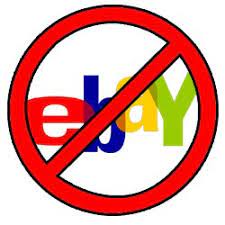 This week eBay has been really batting a thousand, or however that expression goes (I don't follow baseball). First, they changed the way comics are listed and sorted by doing away with a lot of subcategories in a manner that makes finding comic listings a lot less intuitive and more tedious. Many listings that were already up found themselves changed in ways that made it hard to get any eyes on the posts. It was pretty bad. Oh, and then eBay announced today it will be doing away with adult-only listings for no logical reason. It'll be gone by the end of the Summer. I doubt any minors are getting on eBay and using it to buy porn when they have, you know, the entire internet.

No, eBay's adult section has been handy for people like me when it comes to finding weird old underground comics (which could at times be quite sexual) or selling modern comics with the really risque covers that people love (folk like boobs on their comic covers for sure). People like my friend Robin Bougie (who wrote Cinema Sewer) have used eBay to find old and vintage erotica, stuff like that. eBay is getting rid of adult listings though and the only possible reason seems to be it isn't compatible with their stupid new managed payments and they want to put everything under that umbrella sooner than later 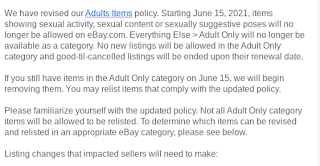 eBay has changed the way we find a comic listing in a manner that is confusing and stupid. eBay also plans to get rid of adult listings which a move that is purely stupid and puritanical. It has been quite a week for eBay and if it keeps being idiotic like this I may start shifting away from eBay to other selling sites that are a lot less of a pain. It's all so dumb.