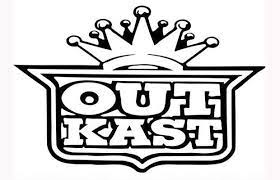 Many music artists have been referred to as having a, "Sophmore slump." That means the follow-up album to a big debut ends up being less impressive than the first LP. Well, OutKast didn't release a mediocre follow-up at all, instead of something weak they gave us something fascinatingly weird. While, "Southernplayalisticadillacmuzik," was a mixture of bragging, beats, and some aspects of conscious rap, "ATLiens," took Big Boi and Dre (again, he wasn't yet Andre 3000) and took them being young adults living in Atlanta to cosmos traveling space aliens, or, "ATLiens." The result was amazing. 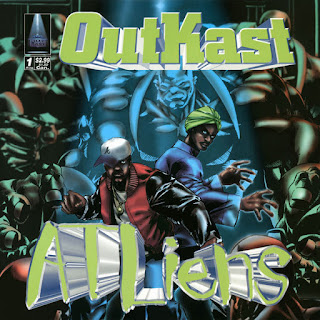 "ATLiens," was released on August 27, 1996. It came with a fun mini-comic, which is the first thing you notice looking at the cover-it's like a comic-book cover! Big Boi and Dre recorded it at an assortment of studios from 95'-early 96' and went form giving us a Southern funky rap LP to something with outer-space effects, hints of gospel, drugged-out rock, and some amazing raps that showed how the duo was growing lyrically. "ATLiens," also marked the first time Big Boi and Dre took over some aspects of production for the songs, not just rapping, but making the songs themselves (a trend that would continue as they become more and more involved in their track's productions). The metaphor of feeling like an alien in America spoke to critics who read it as talking about how being Black in America can feel a lot like you don't belong, aren't truly accepted, and often greeted with suspicion or disdain...just like a space alien. "ATLiens," wasn't just beloved critically, it was a commercial hit that sold a ton of copies and is still considered by many critics and regular people alike to be among the best hip-hop albums of all time.

"ATLiens," has for years been my favorite OutKast album. Sometimes when I listen to other later LPs I find myself questioning that decision a little, but even if it were to tie with next week's album (Aquemini) or their indelible, "Speakerboxx/Love Below," that isn't a slam against, "ATLiens," it just is an illustration of how with this LP OutKast started firing on all cylinders and didn't let up for years. It all kicks off with the solemn singing on, "You May Die (Intro)," which hints how living that gangster life can lead to an early death, basically having OutKast say from the start, "We're moving away even further from partying and playa-focused shenanigans, it's time to dig into the tough stuff." Then we move into, "Two Dope  Boyz (In a Cadillac)," and it shows even if we're getting more serious lyrically, we can still bump some serious beats. The whole first half of, "ATLiens," is amazing, not misstepping for quite a bit, and this first full track serves as the first big testament to OutKast getting even more skilled lyrically and exploring soundscapes further with its thumping bass, space-sounding effects, and the general blend of having some fun but talking about real shit too. The title track then arrives with, "ATLiens," and moves at such a brisk and impressive pace you want to hit repeat once it raps. 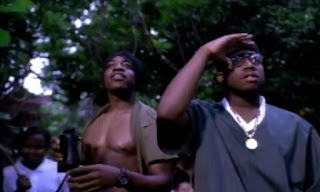 Then we hit, "Wheelz of Steel," which has the best bassline I have ever heard in a rap song in my opinion, just strumming along passionately. Then as the song ends we get some stellar turntable scratching and the whole thing is just lovely. After that, we get even more amazing music via, "Jazzy Belle," which has a quiet sincerity in the beats and melody mixed with Big Boi and Andre worrying about what the future holds for our youth in this current culture focused on immediate gratification--even more relevant now. That leads into the big hit single (and the only track from, "ATLiens," to actually be on the, "Greatest Hits," release), "Elevators (Me & You). It's a song that slowly unwinds its deep complexity and is infinitely listenable. "Ova Da Wudz," is solid and features Witchdoctor on an intense chorus, and then things kind of come to a screeching halt with, "Babylon." The chorus has a nice singing to it, but it can't quite sync up with the beats and the whole thing is just messy; I don't care for it.

We pick back up a bit with, "Wailin," and its minimalist sound, then kind of lose the momentum again with the middling, "Mainstream," that should be so much better than is with some members of Goodie Mob on the track. "Decatur Psalm," picks stuff up a bit more with another segment of Goodie Mob involved, then there's the purely okay, "Millenium." Then there's the kind of dull and droning, "E.T. (Extraterrestrial)." At this point we've had a killer first seven tracks, then things have gotten wobbly, but it all comes to a great close with the stellar, "13th Floor/Growing Old," which is just a beautiful song between thoughtful raps and a gorgeously sung chorus. Last is a nice little remix of, "Elevators," or the, "ONP 86 Mix," and then the album is done after the bonus-feeling track (though it's listed on the liner notes so it isn't really a hidden or bonus track per se). It's quite a journey of an LP and a wild evolution from the first album to this one. 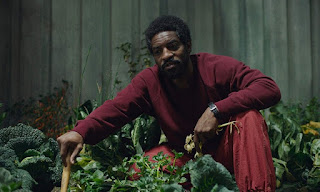 "ATLiens," showed that OutKast was here to stay and not a flash in the pan. With two amazing albums under their belt, the big question was what could possibly come next? Next week we'll discuss the answer, "Aquemini."