Who are the Duggars? 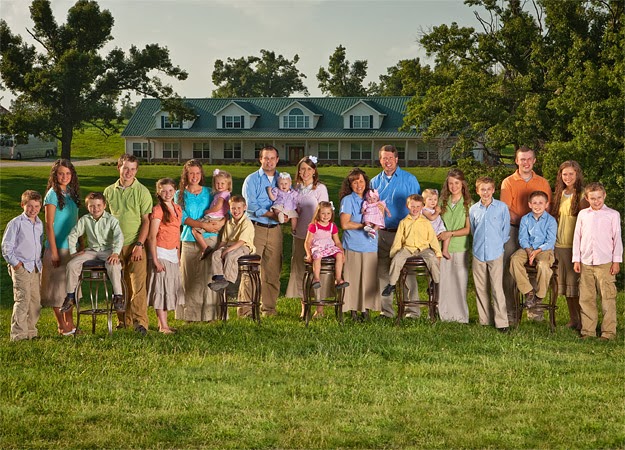 As I lack common sense and enjoy channels that are named ironically, I've discussed a weird fondness for "The Learning Channel", whose slogan I now believe is, "We gave up trying to be educational around when 'Honey Boo Boo' Became a Thing." One show I've caught occasional episodes of but never really watched closely would be the Duggars with their 17 18 19 kids and counting. I have been watching some older episodes more recently and the Duggars just strike me as...odd.

I've written about the Browns AKA "Sister Wives" family before. They interestingly don't bother me at all. Perhaps because they have been persecuted by their own religion for being a "wrong" version of it, they seem a bit more progressive and understanding of people. Plus, while they might be a big family at least things are somewhat spread out--it isn't like one mother has 20 kids or something. If I don't have a problem with the Browns and their lifestyle why do the Duggars seem to rub me the wrong way then?

It's Not the Size of the Family That Bugs Me, It's their Views
My mother comes from a big family. She is the eldest of Eight, count'em, Eight children. Her mother and father gave each of their kids plenty of love, attention, and generally did a stellar job raising them. I don't have a problem with the "big family" aspect of the Duggars that much for that reason as much as other people do. It is more their views and how they try to force them on us that bothers me.

I've never seen the Browns trying to force their views on anyone. When I see the Duggars out there campaigning for politicians whose views are at best ignorant, I get annoyed. When I hear one of their sons, Josh, has a job with the extremely anti-gay borderline-hate-group, "The Family Research Council" I get really upset. When I see them go to the Creation Musem and spout off about how Evolution isn't science and the world is just 6,000 years old, I feel sorry for their kids being told this nonsense more than anything. To paraphrase Bill Nye, its fine if you're an adult and want to believe this, but the children are our future and we need them to actually have a grasp of actual Science. I mean seriously, if evolution isn't real I guess the Duggars don't believe that viruses can evolve and that the flu shot is a massive conspiracy (for all I know they do).

While the Browns are protective of their kids, they don't keep them in a bubble like the Duggars--who are against their kids even kissing before they are married. You read that right, they don't let their kids kiss before marriage. Hell, their kids don't even date. They basically propose to someone, do a "courting" process and then get married. You have one person you kinda-sorta get to know and then marry, how...wonderful?
I would never tell someone they can't have a child, just as I would be against forcing someone to have a child, and with my mother coming from such a big family and that working out fine I really don't have too much of a problem with the Duggars having a huge family--even if sometimes it seems the older ones spend more time raising the younger ones than enjoying life. It all just bugs me more than I should let it, but like a really bad mosquito bite you can't ignore how irritating it is.

The Voice of Reason
I really like Cousin/Aunt Amy on the show because she is the voice of reason. She sees it is absurd to not kiss until you are married. She states how people should dress how they want to dress and wears pants. Amy is the kind of person who may have more conservative views, but I still like them because they are more open-minded than not. I love seeing Amy because she at least seems to have not be all assured how Rock and Roll music is bad for you, or that any date "courting" (even between the Duggars legally-adult children) must be chaperoned. She is eager to learn and even be proved wrong if it turns out she believes something that might be incorrect.

Yet, the Duggars love and accept her, so I can't be that mad at them, even if so much of their behavior really makes me agitated. I would never say I hate the Duggars because like all of us they are human beings, but they do upset me a lot.

Yet, I Can't Stop Watching
I don't think the Duggars are an evil cult, but they are way too into their little bubble of thinking God controls everything, overpopulation is a myth, and that abortion can be compared to the Holocaust. I don't agree with the Duggars at all and they often irritate me with their attempts to force their views on others (They can have their views, but please don't lecture me on "purity"), and yet like a horrendous car crash I can't stop watching them.
It is wrong to say I want to stop the Duggars from living life the way they want. I just wonder how the kids will end up turning out. I truly worry what life will be like for the child if one of their children turns out to be gay. They probably will have to hide it, "pray the gay away", or be true to themselves and face quite a hard time. All the homeschooling makes me wonder if they are getting a well-rounded education like proper homeschooling can provide, or if they are just being taught about Creationism and that God controls everything.

The Perfect Formula
The Duggars bother me, not because of their views or lifestyle, but how they presume to state their way is the best and that they can lecture us about it. They make me so mad, but in the process of making me mad I keep watching just so that I can get even more pissed off. It is a perfect formula that TLC has with the show. Those who agree with the Duggars love watching the show, and those who don't agree with the Duggars at all become regular viewers because they tune in to see what else can make them mad.

As with their other programs that draw in viewers, TLC seems to have basically patented the "So-bad-it's-good" kind of television. Like junk food we know its probably bad for us, yet we keep ingesting it all the same.
Posted by David Charles Bitterbaum at 9:10 AM