The Forgotten (At the Time) X-Men Comic 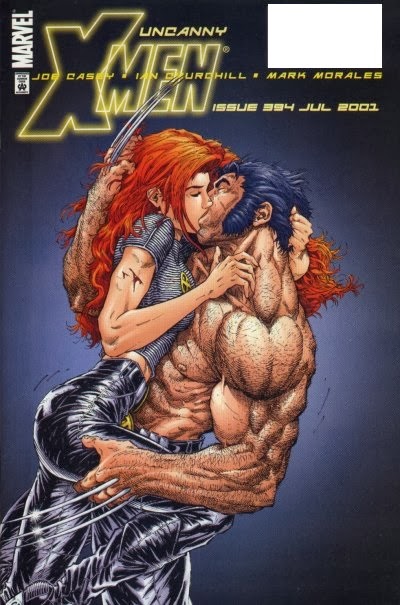 When Grant Morrison was doing his incredible run on "New X-Men" there was in fact another "core" book that had been around for (quite a long) while focusing on some of the characters and what was going on with them. It was "Uncanny X-Men", and while it had the new outfits introduced by Morrison, and would touch upon a few plot points going on in what was then considered the "main" book, this was its own beast in many ways. Talented writer Joe Casey came onto the series with this issue that I found in the dollar bin, #394, and continued writing it until #409 with the most notable thing about the series for some people being that at times the amazing Ashley Wood or Sean Philips were on a number of issues for artwork.

A lot of people think of the run as being a bit too weird, unclear in its focus, and otherwise struggling in the shadow of "New X-Men", with there being folk out there who consider it some of Casey's worst work ever. Hell, even Casey admits things never really "clicked". The thing is though, I liked the run, and it finally has been fully collected instead of being in a few trades here and there--and I think it does read nicely as a cohesive whole despite its flaws. It maybe was confused, overly-quirky, and otherwise kind of a train-wreck, but I really enjoyed Casey's time on the series. I'm not going to talk about all of that though, I'm going to focus on this one debut issue that Casey did and what it had to say about the X-men, and comics in general.

Giving Them What They Want 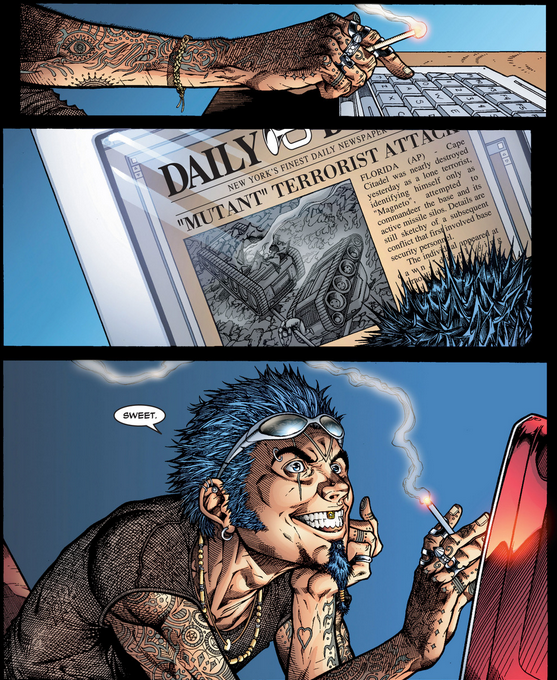 Casey touched upon some amazingly interesting concepts during his time on the series, asking questions about popular culture and the corporatization (is that a word?)  of super-heroes--which he explored even further in "Wildcats 3.0", but that's neither here or there. This issue didn't have that, though, it was more-so just an exercise in bombastic excess that in the end points out its own self-awareness at being over-the-top and merely giving the audience what it wants--explosions and action.

A young mutant--only ever referred to as "Warp"--decides for his 18th birthday he is going to be like those "Mutant terrorists" the media always  talks about, and go to a military base and wreak havoc. He starts destroying everything, and seemingly killing people with his ability to warp them away to some other place--apparently within his own psyche (its never made completely clear how it all works). At one point he warps Logan/Wolverine and Jean into this place of his subconscious, and when in the real world he is finally stopped, in the surreal one it looks like all is about to end for them. Therefore, they kiss...immediately acting like it never happened once they awake in the real world suddenly, what with Jean being married to Cyclops at the time.

The irony comes in that this kid wanted to be the next big mutant-monster, the next "Magneto" but instead just contributed a little bit to giving mutants a bad name, and in the process of trying to be a counter-culture revolutionary caused some of the most cliche things to occur, namely fighting, explosions, and a bit of romance.

Casey is basically saying, "Here is what you want, comic-fans. I'm going to give you it, but spend the rest of my time pointing out how this is all absurd." Ian Churchill's art compliments everything nicely, and this issue encapsulates much of what Casey's run would end up being--a mixture of gorging on cliches and mocking them at the same time in an uncomfortable balance which in most people's eyes ended up not working out that well.

"Underrated" is the Best Word
There is much criticism of Joe Casey's run on "Uncanny X-Men". I like it, even though many don't, and this issue with its mixture of bombast and self-hatred seething below the surface makes for the kind of comic-book I really enjoy. The creator himself may think he didn't do that great a job on this series, but I feel this issue and the others are under-appreciated. Clearly his stuff isn't as popular as Morrison's run, however,  because I did find this in the dollar-bin.

This isn't a bad comic. It just came out at an inopportune time and expressed a lot of potential it was in the end not capable of living up to. "Uncanny X-Men" #394 is the kind of thing many people don't like, but I and some others out there quite enjoyed, resulting in a comic that is mostly forgotten in the shadow of its big-brother's success, but still special and unique. It is truly a good comic, and a good run, making it in the end somewhat tragic how due to being an overlooked diamond-in-the-rough it would end up being another...tale from the dollar bin!
Posted by David Charles Bitterbaum at 9:20 PM