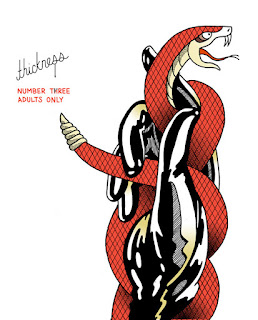 The last issue of "Thickness" is also its biggest. With a paper-sleeve with scenes from the a last story holding the contents of the bulky main comic and an additional mini-comic this is quite a big book--at least compared to its preceding issues. While the 2nd issue is probably my favorite there is still some interesting stuff in here too for sure. 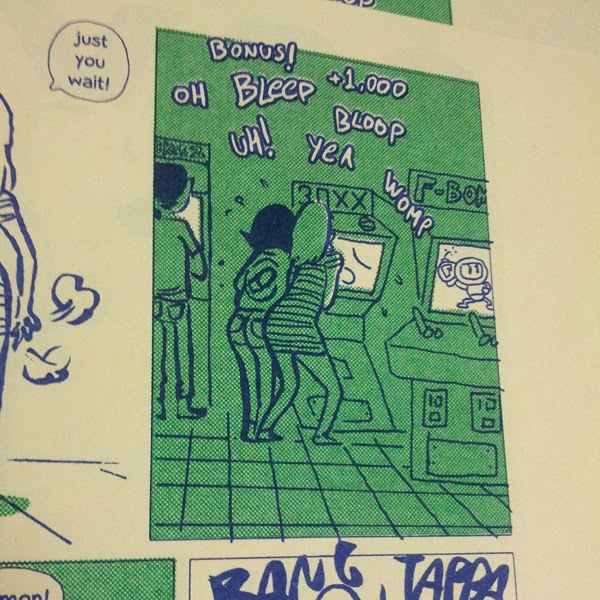 The first story is "30XX" by Lamar Abrams. It featuers some anthropomorphic guys and gals playing a video-game that is sexually charged, to say the least. Basically, it sprouts appendages and holes for people to interact with. The art is quite snazzy-looking and the tone is light and fun. I like it. Here's his website.

The second story is "Protestploitation". By Jimmy Beaulieu, it features two woman who have sex and then put on a war-paint of sorts and go take part in what appears to be some kind of mass-protest-revolution. Its sort of random, but again, it had good art so I like it. Check out Beaulieu's work here.

Next up is "Nightcrawlers" by Edie Fake, it is about a man and a woman who have sex with the aid of the titular animal. It's...odd. The art is okay, at first I thought the woman was a man as Fake seems to draw his characters in a masculine manner--which could very well be on purpose. I wasn't overly impressed with the story. Fake's website is here.

Within the pages of "Nightcrawlers" is a pin-up simply titled, "Pin-Up," by Hamlet Machine. It features two men bound up sharing an adult-toy. It's pretty well-drawn and serves its purpose as a pin-up. Hamlet Machine's site can be found here.

After that is "The Chasm" by Julia Gfrörer, which I honestly could make little-to-no sense of. There is a naked woman with a mask and she receieves oral sex from various people for the purposes of some kind of ceremony, I think? I don't know, its pretty nonsensical. I didn't care for this story much because it just is unintelligible. Here is her site. 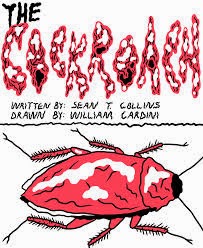 Then we have "The Cockroach." It's a funny little tale written by Sean T. Collins and drawn by William Cardini. It is about a man who kills a cockroach at his lady-friend's insistence and she rewards him with a beer and satisfying him with her hands. I think its supposed to be a sort-of satire of a male fantasy where he does a simple task and is rewarded with a cold drink and sexual favors. The illustration-style is a weird minimalist-looking kind of art, and I liked it. Collins' site can be found here and Cardini is here.

Nearly last within the book we have "Standing Ovations," by Gengoroh Tagame. The book has you go to the end page and start from there reading right-to-left as it is a translated manga. While the art-style is good, I really didin't care for the story. It features a boxer who has been abducted by some evil group and is sexually tortured with all kinds of horrendous things done to his genitals. It's disturbing and unpleasant, which is fine, stories should make us feel all sorts of ways, but it basically is about little more than a man having terrible things done to him without his consent--it isn't a story, its just torture-porn. I couldn't find an English website for Tagame, so if you want to see his stuff you may need to learn a second-language.

The last page features yet another strip by "True Chubbo". Again, its passable but by no means overly memorable. Here's their site.

There is also an excerpt in the book called "Qviet" by Andy Burkholder. It's sparse lines and avant-garde style is pretty appealing, so I liked this a lot. Here is more Qviet stuff.

While overall I do have quite fond feelings about this anthology series, the third issue is a bit more lacking than the other two, so I give it 3.5 out of 5 stars.

In Closing
Valentine's Day is about love, caring, and often intimacy. I hope this overview of a very interesting comic-series was fun for you and inspired you to try and find the issues or grab the collection of everything that should be happening relatively soon.
Posted by David Charles Bitterbaum at 4:00 PM