Earlier today I started this three-part segment where I discuss a fascinating comic anthology known as "Thickness". I now present to you the 2nd post about (what else?) the 2nd issue. 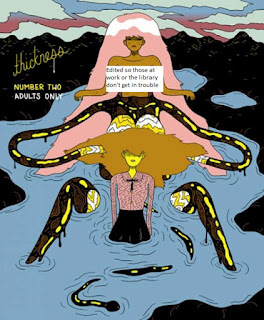 This was the second release and possibly my favorite due to it just having some absolutely stellar stories. With a cover by Michael Deforge and some amazing tales within, if you were to get only one issue of this anthology I would recommend this one. Now, let's break down the tales that make this so smashing a read.

The first comic is an untitled 4-pager by Angie Wang about two women having sex that is so good they fly into outer-space or something. The art is nice but this is a totally forgettable piece. You can find Angie Wang's website here, and it is worth a visit as her other stuff is in fact pretty cool.

Then we have it, what I consider to not just be the best comic of this issue, but the absolute best of the series. Yes, I am talking about "College Girl by Night" which is written and drawn by the immensely talented Michael Deforge--whom I have spoken highly of in another post. It is a seemingly simple tale about a boy who as of "about three years ago" started transforming into a woman anytime there was a full moon. Within that idea however Deforge examines concepts of gender, with our narrator wondering if he is unimaginative with the only thing he does when a woman being having sex. The thought is discussed of what his orientation is if he is a straight man, but when a woman he has sex with men...making him a straight woman? The character's excitement at transforming but feeling saddened about being unable to have any meaningful relationship with someone (as a woman) makes for a fascinating tale of confusion and longing--something many of us probably feel when it comes to relationships. Plus, Deforge is just plain amazing when it comes to art, of course. See more of Deforge here.
"Dirty Deeds" is the next comic, done by the quite-talented Brandon Graham. It basically uses some futuristic sci-fi technology as an excuse to have all sorts of wacky sex-antics, but what amazingly drawn antics they are! Between artificial appendages and virtual-reality shenanigans it is quite the fun and good-looking tale. See more of Graham at his website.

After that, we have in the middle of the book a pin-up by Jillian Tamaki of a woman with strange little dolls just kind of posing. It is quite pretty. More of her here.

My least favorite comic occurs next, which still isn't horrible so much as just incredibly obtuse. "Slime Worm", by Mickey Zacchilli. There is a woman who loses a wedding ring, goes into some metaphysical swamp, talks to a strange snake creature, and, um, there is discussion of ice cream? As I said, it is all very strange. At least the illustration is somewhat neat with its creepily-dark look. His site is here. 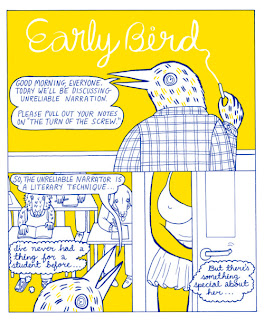 The last full-story is a weird one called "Early Bird" and features an anthropomorphic bird teaching a class about narration techniques before finding himself so aroused by a student with the head of a worm he begins to have sex with her...whilst still imparting his lesson to everyone. It is very silly and a bit funny, plus the writer/illustrator Lisa Hanawalt does a good job drawing all the characters. I've reviewed her latest book on the blog, and her site can be found here.

The book closes with another "True Chubbo" comic that again is perfectly fine if unremarkable. Once more, their site is here.

With the mostly amazing work in this book I don't hesitate to give it 5 out of 5 stars and declare it awesome!
Posted by David Charles Bitterbaum at 12:00 PM