I Dropped A Lot of Comics Part One: Marvel

Ready, Set, Cut Books!
So yeah, as the title says, I dropped a lot of comic books from my pull-list/s. Comics are getting more expensive and I'm not made of money, so it is potentially interesting to note what I'm still reading as it is reflective of how I think about comics, and what I enjoy in them. Let's examine things in a sort-of-by-publisher method. First up, a post about Marvel comics and a variety of the books I am keeping or dropping.

We should address the biggest casualty of my pull-list reduction, almost every X-Men book. While some past X-Men comics are among my favorite, currently much of the line seems to be moving at a glacial pace, with Bendis' "New X-Men" and "Uncanny X-Men" being decent reads but so abhorrently slow in actually, ya'know, going anywhere that I just can't put up with them anymore.

I do truly enjoy Jason Aaron's "Wolverine and the X-Men" and those first few issues of Brian Wood's "X-Men" are solid, but considering how almost the entire line is being drawn into this "Battle of the Atom" cross-over, it makes sense to drop all of the books that will be involved as there is little point in reading just some of this cross-over. Plus, with Marvel's "Infinity" event going on (more on that in a second) I honestly can't fund two mega-event cross-overs at once from the same publisher. Oh, and "Uncanny X-Force" has been dropped because even though I like the whole plot with Betsy and the Fantomexes (Fantomexi?) I still just can't pay that much for a comic I only enjoy a few aspects of. The only X-books I am keeping on my pull-list are "X-Factor" because it is awesome and almost through with its run anyways, and the amazing "X-Men Legacy" which I have not been shy about singing the praises of. Oh, and I'm keeping the main "Wolverine" book because Paul Cornell is a Hella' good writer. 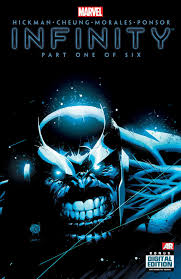 Despite dropping all those X-books I am sticking with most of the Avenger's titles for now (like "Avengers Arena"--even if it is getting canceled), at least whilst "Infinity" is taking place. I would like to follow that event to its conclusion, so after "Infinity" I may drop a bunch of Avenger's titles, keeping only the stellar ones such as "Young Avengers" and maybe "Uncanny Avengers" which varies between really interesting or a trudge to read through, sometimes within the same issue. The new version of the "Mighty Avengers" hasn't come out yet either, but any book with Luke Cage playing a prominent role is worth getting in my opinion.

Oh, and my apologies to Cullen Bunn, but "Fearless Defenders" just isn't doing it for me, even if you kinda-sorta brought back Annabelle, and "Venom" hasn't been the same since Rick Remender left so those are cut too. His "Deadpool Kills Deadpool" series is going to stay on my list as it is sort of the conclusion of a trilogy to the "Deadpool Kills" saga and I feel too invested to quit now.

Even though I dropped Bendis' X-Men books, I do want to keep reading his "Guardians of the Galaxy" as it is always enjoyable to see space-adventures in the Marvel Universe, plus it ties-in with the aforementioned "Infinity", so it is safe for now. Other books that were safe with little hesitation were "Thunderbolts", the normal-version of "Deadpool", and I'm going to at least try that first issue of "Fantomex Max".
Lastly, Mark Waid should be feeling good because "Daredevil" is still being picked-up by me, without question, and after some hesitation I do still want to keep getting "Indestructible Hulk", at least while he is still writing it. Oh, and "Superior Foes of Spider-Man" by Nick Spencer may be his Marvel comic that breaks the trend of most of his Marvel work being, well, terrible. Also, even though I don't normally read "Savage Wolverine" I want to at least get those issues written and illustrated by the amazing Jock.

Wait, I completely forgot for a second, I plan to follow "Cataclysm" as the Ultimate Imprint came about when I was a young teen reading the comics and enjoying them a lot, so I feel a bit of a connection to the Ultimate Universe. I won't be reading all the tie-ins though, just the main book.

That's the Marvel books, stay tuned for DC and Image (Part 2), other publishers (Part 3), and a post reflecting on how what I chose to cut and keep reflect on not only my tastes, but the comic industry (Part 4).