What My Girlfriend and I Thought of the Game "Remember Me" 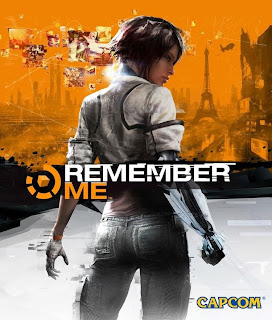 This may be one of the few times where starting the game with your main character suffering from amnesia actually makes sense and doesn't seem lazy. After all, this is a game about a world where memories are stored by a big (and of course evil) company and you are someone who tried to stop it, was clearly caught, and had her memories wiped. Even if the rest of the game were terrible the fact that this title actually pulls off the tired and overused, "You have amnesia," plot-device, is in and of itself impressive. Luckily, the game isn't terrible, it is in fact pretty good, if with some notable faults--ones both myself and my girlfriend noticed.

Before saying anything else about this game, "Remember Me" is an interesting release if for no other reason than it is a completely original property. This isn't a sequel to something, or based on a movie/T.V. show/comic/book. It doesn't tie-in with any other games, it's just a brand new release. While completely original games are not unheard of, they do seem to be getting somewhat rarer, so even putting aside everything else in the game that I enjoyed or didn't care for, the fact that a company worked hard on and released something like this is at least worth some plaudits in itself. What is the game about though? As I said at the start of the article, memories, and how they impact us.

It is 2084 and you are a memory hunter named Nillin. For some reason you are locked up and have had your entire memory wiped. From that point on the game has you doing some things that get repetitive and dull, but in fascinating city known as Neo-Paris that is as beautiful and creative as it is unfortunately sterile. Even though you'll want to wander around Neo-Paris, this is basically an on-rails adventure in that you run through various small alleyways and rooms, find something to climb on to move ahead, and then fight some enemies--again and again and again.
The city of Neo-Paris is gorgeous but almost never truly feels alive and/or vibrant. With the constant variation of "run here, fight these guys, climb this, run some more, climb, etc." you'll always enjoy the sights and sounds of the game, but grow tired of only being able to interact with them in a single way. It is telling that at one point while my girlfriend, Samii, was watching me play she asked if in this game I can pick things up and interact with them like in other titles. I told her, "No, you can only touch or climb on what the game makes explicitly clear you can," and that helped illustrate the limitations of the game quite well--namely it is full of beautiful things and imagery, but you can't really "touch" any of it, so to speak.

My girlfriend may have been disappointed this game didn't have much interaction outside of the dull fighting, but she and I really did enjoy the story. It has some cliche plot elements, but much of the game is loaded with creativity, from the aforementioned city of Neo-Paris, to the idea of how people store and exchange memories, the portrayal of class-ism in a world where the rich keep getting richer and the poor live in dangerous slums, and of course nothing is cooler than flying drop-ships.

So, we have a game with a fascinating world but game-play that grows old often. Is there some element of the game-play that is exciting to do so that you aren't playing through mindless fights waiting for the next interesting cut-scene? Yes, there is; they are the memory remixing segments and they are incredible.
If I and Samii were to say what our favorite part of this game was, we would both agree on the memory remixing segments. The only negative to them really is that only four occur, but when they happen it is amazing. Your character, Nillin, has the ability to steal memories, but she also sometimes goes in and alters how someone remembers something so as to change their opinions, outlook on life, or basic reason for being. Suppose someone is after Nillin because the bounty on her head would help fund drastically-needed medical care for the bounty-hunter's spouse. Well, Nillin goes on in there and makes them think their spouse is dead, killed by the very people Nillin is fighting, and suddenly you have a new ally.

Playing through the memory remix segments involves cycling around as if rewinding and fast-forwarding a video, looking for little "glitches" that can be manipulated to alter a memory and make things go completely differently. These bits in the game are so cleverly done and impressive that you'll wonder how the developers thought this stuff up--and why no one else has yet.

Samii and I both found ourselves bored when the game was simply engaging in the basic stuff of moving around, climbing objects, and fighting--she was bored watching, I was bored mashing the buttons. Anytime the story advanced however, or a memory remix occurred we immediately found ourselves intrigued and enjoying the game. This results in a title that as I said is pretty good, but has some noticeable faults. In the end however, the good of the amazing story, memory remixes, and beautiful world is a bit stronger than the faults of boring combat and constricted exploration.
If you find yourself the opportunity to rent or buy "Remember Me" I would recommend you do so. Should you rent the game it doesn't take too long to beat, but if you are able to own it for a good price that is of course good too, and supports the developers, thereby hopefully encouraging more new games with this kind of creativity to be made. If you want a great story and some moments of incredible game-play such as with the memory remixes, you won't be disappointed. Should you be expecting fun combat and a world you can spend time exploring, you'll be upset. The key is to have balanced expectations and enjoy the game for what it is--good, but flawed. Plus, with the great story this makes "Remember Me" a fun title for others to watch you play...as long as that boring combat doesn't go on too long.

Side Note: "Remember Me" is on multiple platforms, but the version I played was on PlayStation 3, for those who were curious.

Email ThisBlogThis!Share to TwitterShare to FacebookShare to Pinterest
Labels: rant-reviews, Remember Me, video-games