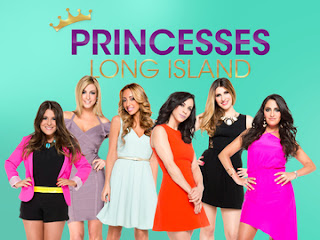 I've watched "Princesses: Long Island" off and on throughout this first season of its existence, and found myself confused, disgusted, intrigued, saddened, and laughing at various points--and sometimes all at once.

For those of you unaware of this show, it is a reality program on Bravo which is basically about five self-proclaimed "Jewish American Princesses" (didn't that phrase use to be more of an insult?) who waste their spoiled lives whining about how hard they have it, and one sixth member of the troupe who seems to actually be relatively grounded and has to work for her money.

Some think the show is a bit anti-Semitic, as many Jewish women don't just live at home when they are still in their late 20's or early 30's due to being unmarried. Most Jewish women, and women in general, go have lives instead of being adults that act like spoiled teenagers. I don't think the show is anti-Semitic so much as it is a reflection of the unusual extremes of some members of Jewish society. Being Jewish I've met plenty of Jews, both men and women. There are plenty of Jewish women who are accomplished, smart, and successful. I have also met a few who are utterly insane and basically are a perfect reflection of some of the women on this show--just not many.
To be fair, I don't know anyone as utterly delusional as Ashlee. She is thirty years old and acts like her life is so tough, in the season finale checking herself into a hospital. Why? Well, because she freaked out so much when arguing with the other girls over petty nonsense that she then wandered off and had to hitch-hike to the ER so that some doctors could give her a benadryl, seriously.

I don't think the show is all bad though. We also may have the drunk and boyfriend-stealing Erika, the hung-up on decades-ago high school drama Casey, Amanda with her really creepy mom (and so effeminate I think he may be closeted boyfriend Jeff), and the mostly bland Chanel, but Joey is actually not that bad.

Joey can be a bit rude to the other girls, but some of them need a reality check. Joey is still living at home rent-free, but that is basically it. She actually goes out and works for money, has built up some funds through working to invest in starting a business, and may have come from privilege, but realizes life isn't all about shopping and riding around in a limo while bemoaning how difficult things are for you.
"Princesses: Long Island" is really just a reality show that takes spoiled teenagers and ages them into their late 20's and early 30's for disturbing effect. These are the real housewives if they took away the "wife" part and instead made their parents who they are dependent on for everything. They just also happen to be Jewish because when looking for a show about crazy women the people at Bravo saw a demographic to exploit that hadn't been tapped yet.

I don't think this show makes Jews look bad so much as it makes spoiled rich girls who never grew up look like atrocious people (with Joey being the odd-one-out whom is sane and actually trying to make something of herself). Yes, some are worse than others, with Ashlee taking the self-absorbed cake, but when you have someone nearing 30 crying about how her high-school boyfriend left her (Casey), or someone whose mother is so desperate to be hip she goes clubbing with her daughter (Amanda's mom) you see these women have serious issues.
As a reality show "Princesses: Long Island" is a decent piece of programming for people who never tire of seeing spoiled people act stupid. As a way to learn about Jewish culture and people it is a horrible reference piece unless you are looking for the worst examples of Jewish American Princesses. I wouldn't mind a show that focuses on well-balanced, hard-working, and productive Jewish women, but that probably wouldn't get many viewers so for now we are stuck with this motley bunch. At least one of them is bearable.
3.5 out of 5 stars (in terms of entertainment value).