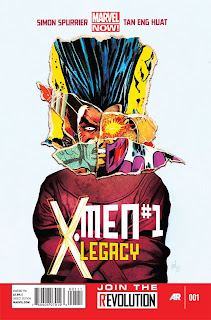 A person with a ton of amazing powers often bores me. For example, I make no secret of the fact that Superman usually is dull in my eyes. He can do almost anything and is well-adjusted and happy...eh. Give me a character who is so powerful that their own abilities work against them, or they are powerful but have trouble using powers appropriately, and I'm intrigued. This is why, "Legion," or David Haller as the character prefers to go by, is a fascinating individual to me--besides my having a soft spot for characters with the name David, of course.

The son of one of the most famous mutants around, Charles Xavier, David Haller has incredible powers, the kind that can alter all of reality and possible destroy the world or make it a better place. He also has crippling mental-health issues in that each of his powers manifests itself in his mind as an individual character with its own motives. He bounced around various comics for some time, sort of disappeared, was found again by the New Mutants, and then we reach the point in David's recent history I'll discuss, from the "Age of X" event  to now. 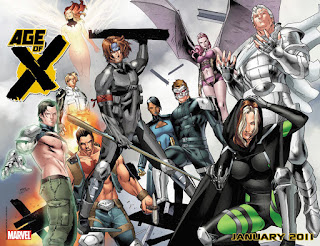 Anyways, David had gone to live on the X-Men's island-nation of Utopia, and he was not doing well psychologically. Then suddenly the world shifted into a comic event called "Age of X". Things were odd though, the characters felt a strange sense of repetition, memories didn't quite make sense, and before too long it was revealed that one of David's personalities/powers had altered all of reality into this little world where David was a big hero and everything was perfect for him. It of course had to end.

Normal reality was restored, but some of David's personalities got away, with the comic "X-Men Legacy" following he and a handful of X-Men working to get them back. Mike Carey wrote the "Age of X" stuff and David's  "Legacy" adventures quite well and then David just sort of disappeared.

After the "Avengers Versus X-Men" event there was a newly re-numbered "X-Men Legacy" starring none other than David Haller. Oh, and it has been one of the best comics coming out from any publisher. It is revealed that at some point after his shenanigans in the old "X-Men Legacy" David's dad put him in a remote camp high in the mountains to work on gaining better control of his powers. Well, those who read AVX know that things didn't work out well for the professor and that is reflected in this comic by David basically having a meltdown when he senses Xavier's death. 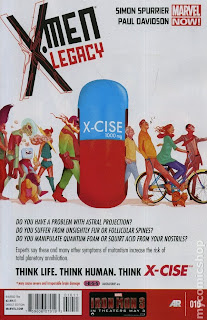 The thing is, he gets better though, and realizes he needs to do something the so-called "super-heroes" never do, be proactive instead of reactive. This new comic written by Si Spurrier is just incredible. It drips with contempt for modern super-heroes in such a blatant way I can't believe Marvel publishes this series. It points out that if someone were to go and fix the threats faced by Mutants instead of just letting them percolate and build, something positive could actually get done.

The comic also is full of introspection, with David reflecting on good, evil, and if he is in fact a hero or a villain. Plus, the comic often is just hilarious. The 12 issues I have read (I haven't had time to get to the 13th that came out recently) are just sheer genius. Between David's mind being shown as a prison for his multiple personalities, to the way some of the most recent issues seemed like little one-off tales that actually all linked into a killer climax at the end of the 12th issue, this is just an amazing series people really need to be reading.

David's personality and sarcastic attitude really shows in the comic under the skillful writing of Spurrier, and Tan Eng Huat's artwork is just stellar with its quirky appearance, perfectly matching the comic's tone. Plus, the covers by Michael Del Mundo are just pure awesomeness. Seriously, go get the first trade and the newest issues or the second trade when it comes out shortly. You will be in for some awesome comics courtesy of Spurrier's stellar writing, Huat's amazing art, and Del Mundo's fantastic covers.
5 out of 5 stars (for issues 1 through 12 overall).
Posted by David Charles Bitterbaum at 2:34 PM