Brief Musings on Super-Heroes and the Media

Back in September of 2012 I discussed the first issue of a comic and how it got me all busy thinking. The comic was "Peter Cannon: Thunderbolt". It took the slightly-known character and dedicated a story to him about what would happen in a world where a hero wasn't really needed anymore and instead became something more like a celebrity. 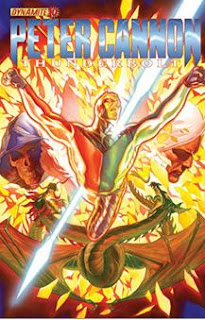 Over time the series went dramatically up and down in quality, at times being very thought-provoking and entertaining, and at other points seeming so cliche it hurt. In the end the series sort of ended how I predicted, with Cannon's lie about actually being "The Dragon" exposed. However, in this issue Cannon is able to fake his death and the world carries on at trying to be more peaceful with UN talks of weapon disarmament. Its a decent end to a series that always varied between really good and really bad, so it makes sense it would finish in a somewhat middling way. Still, the interesting messages were there throughout the series and kept me thinking about Peter Cannon's portrayal as someone who wasn't so much a super-hero as a media-star and pseudo-religious icon.

I enjoyed the new version of the series "Animal Man" by Jeff Lemire for awhile, but grew tired of all that, "The Red," "The Green," and "The Rot," stuff. The more recent issues have had some of that in them but also have expanded the view of the series in interesting ways. After the unfortunate death of Buddy Baker's son, Cliff, Buddy has started getting more press attention and even though he is just trying to go out and fight crime, suddenly social media is talking all about him and the media is hounding him. It is an interesting take on how a super-hero who is public with his identity would be harassed by everyone (Brian Michael Bendis addressed this some in his famous "Daredevil" run when Matthew Murdock had his heroic identity outed). 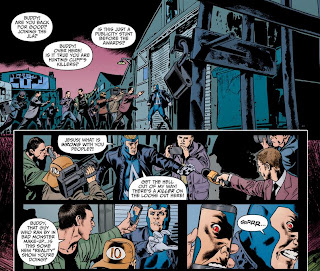 Both "Peter Cannon" and "Animal Man" have addressed super-heroics and the impact the media can have on them in interesting ways. Cannon's series has ended but Buddy Baker's exploits as Animal Man continue to garner critical acclaim and seem to show no sign of slowing down. I enjoy seeing how comics discuss the rise of the "always connected" culture we have and hope to see more series do so.
Posted by David Charles Bitterbaum at 9:09 AM