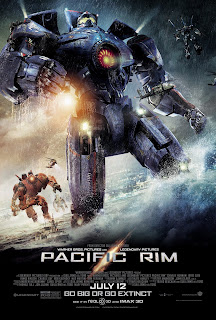 Huge Robots and Monsters Fighting? Okay, I'm Interested
"Pacific Rim" was a movie that sounded great when described to me, but I had concerns about if it would be good. I shouldn't have worried as this is one dynamite flick.

This film takes the best ideas from the Godzilla movies and the Transformers films but manages to avoid seeming like a rip-off of either, and instead is an amazing improvement over those past films (and pretty much all the Transformer flicks have been horrendous so "Pacific Rim" didn't even have to try hard; the fact it did is all the more impressive).

I saw Pacific Rim last night at one of those day-early showings theaters are starting to have for various new releases instead of midnight-showings. I guess studios realized they could make more cash having movies play Thursday evening (which is easier to people to go to) instead of right when the clock hits Midnight for Friday (which only huge fans of something will do, such as me with the "Avengers"film.). My girlfriend came with me and she enjoyed the movie a lot too for similar reasons, e.g. the action and humor.

I won't say too much of the plot as there isn't much complexity to it besides, "Humans build robots to fight monsters, but the people piloting the robots have some personal issues," but I will point out that in a film where the main draw is huge machines, both actors Charlie Day and Ron Perlman inject a lot of humanity and humor into the proceedings. Plus, Idris Elba imposes with his often-steely yet slightly vulnerable demeanor as the leader of the program that fights against Kaiju.
While neither Day nor Pearlman spend a ton of time on-screen (Perlman is almost criminally under-utilized), Charlie Day's obsession with the monsters (called "Kaiju") and determination to learn more about them is great fun to watch, with his enthusiasm being so contagious I was as excited as he was to learn more about the strange creatures attacking earth, plus he and Perlman bounce lines off each other with ease. Perlman plays an eccentric black-market dealer named Hannibal Chau, and his mixture of aggression and eccentricity fills the screen almost as impressively as a rampaging Kaiju. The aforementioned Elba is also great with a seemingly-cold personality in fact masking a myriad of emotions.

Oh, and there is a main character who is dealing with some tragic events from the start of the movie and his love interest, but I didn't really care that much about them except when they were piloting the huge robots (called "Jagers") and beating up Kaiju.

I've talked a lot about the characters, but the main reason I went to this movie (and the main one you probably are too) is to see some Jagers smash-up some Kaiju, and this movie sure does not disappoint on the action-front. 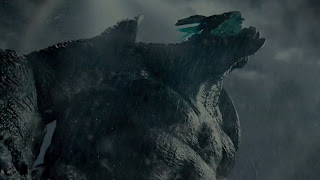 I said I was worried if a movie about robots fighting monsters would be able to sustain a full-length feature, but I should have trusted in Guillermo Del Toro as while the man has had some less-than-awesome flicks, his work generally is quite solid. The film imparts a sense of enormity from the Jagers and Kaiju through clever camerawork and startlingly amazing special effects that clearly cost a ton of money (but are totally worth any price tag), and it is evident that Del Toro was as excited to make this movie as we are to be watching it.

Whether it is a Kaiju that spits acid or one that can swim incredibly fast, these things are as impressive in appearance as they are terrifying. The Jagers are equally imposing and seeing them come to blows with the Kaiju is such a thrill that multiple times during the movie I couldn't help but exclaim, "Cool!" a bit louder than I should have in a theater. The sheer force illustrated by the fights is visceral enough you can almost feel the rumbling of the earth when a Jager is crashing around with a Kaiju.

"Pacific Rim" is funny, action-packed, and just plain gorgeous. I had a ton of fun watching it and would eagerly see it again if just for the amazing fights between the Jagers and Kaiju. I wholeheartedly recommend you see this movie and have your friends join you too. Whether you love monster movies, sci-fi films, or just want something fun to watch for bit over 2 hours, "Pacific Rim" should more than satisfy your urge for some Summer fun. Get a ticket, relax, and prepare to yell, "Cool!" as I did.
4.5 out of 5 stars
Posted by David Charles Bitterbaum at 4:52 PM