I may have posted a Television Tuesday post a bit earlier today already, but I also wanted to share my thoughts on a show where what is happening this week could be dramatically different the next, so I might as well comment on stuff now. The show in question is half-social experiment and half-competitive game show to win 500,000 dollars, "Big Brother".
Now in its 15th season, "Big Brother" is a show I started watching last season as my girlfriend had always been a fan and I figured it couldn't be any worse than most reality television shows. There are the more stupid elements where the house-guests/contestants do little challenges and competitions, but I find the most interesting aspect to be the aforementioned "social experiment" parts.

You see, the house-guests are really more prisoners in the sense that for 90 days they are stuck in this household with nobody besides each other as company. They don't even have a camera-crew to chat with as the house is rigged with a ton of cameras that capture their every move and statement, every day, all day. With no idea what is happening in the outside world, these people live in what is basically a surreal bubble where they only have each other and the occasionally beamed-in hello from host Julie Chen. She usually demands that they vote out someone for that week in a way that makes it seem like she's either going to have a nice interview with the voted out house-guest or devour their still-beating hearts once they walk out.
There are all the intricacies of who gets voted out, how some people can "veto" their nomination to leave, and all that other junk, but as I stated, that stuff doesn't interest me. I get interested when the people start to "crack" in the sense that their fake-nice personality they came in with slowly disappears as their "real" self starts to emerge due to the stress of being stuck in a house with the same people, 24 hours a day, with little to do besides eat, sleep, or lounge by the pool.

Sometimes the cabin-fever (as it were) results in interesting romances on the show, or "showmances" as folk have taken to calling them. Other times, the stress of being in the "Big Brother" household results in hidden prejudices emerging.

This season of "Big Brother" started gaining some controversy when people noticed on the 24-hour live feeds (that can be accessed via the interne)t that some the house-guests weren't just the usual assortment of trustworthy folk, liars, and annoying contestants. No, some were flat-out racist. Like, calling welfare, "Nigger Insurance" levels of racist. GinaMarie made that comment, but it seems Aaryn has the most vitriol, often being hurtful to minority house-guests such as Candice or Helen, talking in a mocking "ghetto" fashion to them (Aaryn to Candice), or that they should, "Go make rice (Aaryn to Helen)." Weirdly the internet feeds have seen Spencer make some less-than polite comments about Andy (who is a gay) but those haven't seen airtime.

Speaking of what gets aired on Big Brother during its televised broadcasts, it seems at first CBS maybe was trying to avoid showing any of that on the air, but eventually the racism was just causing so much trouble (and enough people online were discussing it) they started to address it (and threw a handy disclaimer up which airs for a good 10 seconds before the show about how house-guests views do not reflect that of CBS).
One must wonder if some of the house-guests have just completely forgotten that their every word is being broadcast for all to see, or are just at a point where they don't care. Either way, Aaryn and GinaMarie may not know how they have already lost their jobs and have a ton of people in the outside world hating them, but once they emerge into the real world they will get quite the rude awakening. Apparently Aaryn's mother has hired publicists to try and save whatever reputation of Aaryn's can be salvaged (I doubt any).

There have been calls by some to boycott the show due to statements made by the house-guests, or have those house-guests kicked out, but I think that is the wrong thing to do. I think we as a society need to see how this melting-pot of people forced to live together reflect what we as a country are like. We may not all live in a house with one another, but the United States is a place where those with differing views share the same "space" in the sense we all share this country. It should be seen that even though it is 2013 there still are those who carry hurtful and racist views, and instead of trying to ignore the problem by not watching "Big Brother" or kicking those who say terrible things out of the house, we should study what is going on and see what we can learn from this reflection of us--the good and the bad.

After all, Howard (who is black) consistently has shown he can be the bigger man when seeing the racism coming from other house-guests and literally had to pick-up and carry Candice out of a room before she, Aaryn, and GinaMarie came to blows (I would embed the clip but CBS won't let me, so go to the scene here if you want to see some quite intense moments).

Things have settled down since then but I bet it will only be so long before things get ugly once more, or at least it will be interesting to see how Aaryn and GinaMarie react when they are voted off (because they clearly aren't going to win) and are told how pretty much all of America hates them.

"Big Brother" is a show all about back-stabbing, lying, and doing whatever it takes to be the last man/woman standing and "win"--kind of like real life. "Big Brother" is also about what happens when you have genuinely good people stuck with terribly unpleasant and prejudiced ones and they have to try and not kill each other--exactly like real life. There may be silly moments like in the various challenges/competitions, but those scenes are less important in this microcosm of the world known as the "Big Brother" household that those that reflect everyday life's struggles. That is what keeps me coming back.

By facing the harsh realities of how there are some genuinely hateful people in the world we can work to overcome all that negativity and instead of hiding away the ugly side of ourselves, expose it for all to see and work toward healing the long-present wounds of racism, homophobia, and sexism. That or we could just keep on pretending prejudice doesn't exist and ignore the parts of "Big Brother" that make it apparent and instead just focus on the silly bits like when the house-guests had to eat a ton of frozen yogurt... 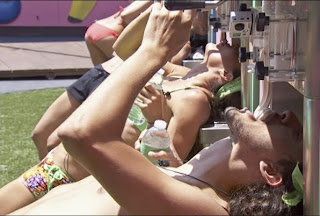 However, I like to hope we are a bit deeper than that.
Posted by David Charles Bitterbaum at 7:15 PM