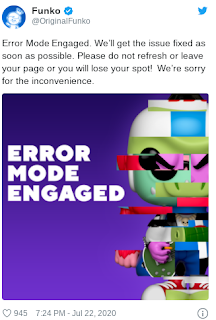 I haven't been collecting Funko Pops as much lately, but I had written about how interested I was in the Black Lightning one due to come out for a virtual comic-con event (that happened today). I also was aware at only 3,000 of them it would be hard. I understood that it was going to be a show exclusive if San Diego Comic-Con AKA Comic-Con International had occurred. COVID-19 resulted in no show, however, so here we are. I logged on this evening when Funko was supposed to have all its exclusives go live, and the entire system fell apart. Happy virtual con season, everyone!

Today, Funko's site was supposed to work for a big influx of users. Instead, the site sputtered, stumbled, and even once it let users through the pages for figuring out the cost of shipping took people upwards of 30 minutes to do anything. I sat and waited, and I was quick, but it was a wreck. If Black Lightning had sold out fast as I've seen some Pops do for other big events, I'd have understood. Waiting forever to only finally be told, "Sorry, it is gone," was outrageous, however. Everyone on Reddit and Twitter is extremely PO'd at Funko, and I'm quite sour myself. Their sever failed horribly, and they were ready with a dumb error message (as seen at the top of the post), but not ready to actually fix things. What a mess you've made, Funko. What a mess indeed.
Posted by David Charles Bitterbaum at 10:06 PM