A, "Rorschach," Comic is Coming 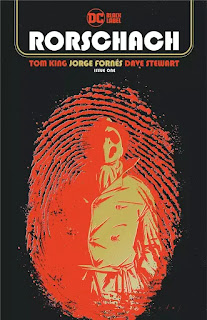 In news that did and didn't surprise me, we are getting a new, "Watchmen,"-themed comic. That part I could've predicted as, "Doomsday Clock," was relatively successful and the, "Watchmen," television show was a smash-hit. It is titled, "Rorschach," and focused on that popular character--again, not too hard to call. The part I would not have predicted is that Tom King will be writing it in the style of his 12 issue maxi-series that tend to be really good, with Jorge Fornés on the artwork. It'll be a Black Label book, as the other mature-reader lines are now dead (we miss you, Vertigo).

I'm intrigued about this new title as when Tom King is on, he is on with his works, and generally his maxi-series are his best work. Fornés is a skilled artist as well so the book is gonna look swell too. Seeing these properties used without the permission of Alan Moore--who was so horrendously mistreated by DC--fills me with a bit of dread and sadness, but at this point, DC clearly doesn't really care what Moore thinks and Moore is going to do his own thing as well. In the meantime, I hope King and Fornés give us something snazzy.
Posted by David Charles Bitterbaum at 8:50 AM