The End of, "Mad Magazine," is Sad and Was Inevitable 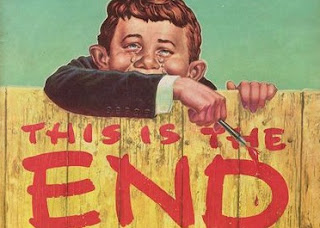 Word started leaking late-ish Wednesday that, "Mad Magazine," was for all intents and purposes shutting-down. From now on to keep the trademark its owner, DC Comics (yep, they acquired it some time ago), will just reprint old material every now and again. This means, "Mad Magazine," as we know/knew it is dead. This is both sad considering the publication was a cultural icon for its 67 years of existence, and arguably was inevitable. The, "Inevitable," comes from basically the internet, because at this point the internet can be both thanked and blamed for everything. What was once an audience eager to read a magazine's take on something dumb a politician did or to witness jokes about a movie/television show is now an audience that creates their own content via memes, YouTube videos, and snarky tweets. Nowadays if you want a humorous opinion on your hit show you don't need to wait for a publication to discuss it, you can hop online and see never-ending jokes and hot-takes within minutes of something everyone is talking about.

Polygon agrees with me on this that while everyone from Baby Boomers to folk born before 2000 or so may have some fond memories of reading, "Mad Magazine," how many of us still actually read it as opposed to just liking the idea of it still existing? Then, for everyone born after the new century arrived how many of them even ever picked-up a copy to read? The answer to both of those questions is obvious with, "Mad Magazine," now ending besides the occasional reprint of material that fits a specific theme (e.g. "Mad about the 1980's," or such). As time marches on another era comes to an end. It is sad, even if it was to be expected.
Posted by David Charles Bitterbaum at 2:26 PM