Just a Reminder For Everyone Who Has Forgotten: The Punisher is a Villain 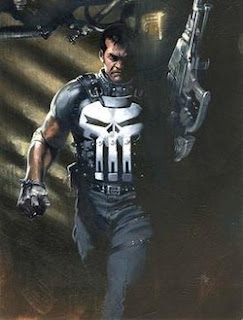 It astounds me this needs to be said, but Frank Castle AKA the Punisher is not someone to admire or look-up to. He is a villain who represents someone so traumatized by terrible event (the death of his family in mob cross-fire) he takes it upon himself to wage his own one-man war on crime, justifying his murdering of countless people as him only killing, "Those who deserve it." The Punisher is what happens when a human being no longer has any compassion, heart, or remorse, only rage and the training (thanks to his military experience) to manifest his murderous intentions effectively. The Punisher is symbolic of someone who no longer believes in the rule of law outside of his own narrow definition of who is innocent and who is guilty and needs to be killed. He is an interesting character to read about or see play-off of other people in comics, but he is not a good person. He maybe is not some straight-up bad-guy like the Green Goblin or Sebastian Shaw (two random examples), but he is no hero. Okay?

Why am I going on about this? Two reasons. First off, there is an unfortunate trend of those who serve in the military adopting the Punisher logo (a uniquely-designed skull) as a signal of pride because Frank Castle was in the military as well(generally he is written as having been a Marine). His being in the military is maybe one of the few admirable things about the Punisher, but that was long before he became the terrible monster he has been written as in the comics. Also, his logo is now popping-up among police organizations. The idea of police officers wanting to co-opt the signal is atrocious, with my own region of Saint Louis having become a topic of discussion due to Facebook groups of police officers having it leak that these groups were full of racist imagery, hate speech, and the Punisher's logo. In a misguided attempt to back their fellow officers some Police unions have encouraged their members to post a bunch of Punisher-imagery too, which seems to completely miss the point about how the police should not be protecting their worst officers who bring a bad name to the law, but instead should work to expose the rotten elements so as to have accountability and make people less terrified of cops--but I digress.
I applaud the St. Louis Police Commissioner, Colonel John W. Hayden Jr. for this statements against this idea of police unions posting Punisher-imagery, with him releasing a statement that quotes one of the Punisher's own creators--Gerry Conway--as saying if anything the Punisher represents a lack of law and order. Anyone who knows even the slightest bit about the Punisher is aware he is a violent vigilante who interprets right-and-wrong to his own benefit. He is not a good man and the idea of law enforcement officers wanting to emulate him or his views is frankly terrifying. If police unions desire to express their support for fellow officers there are much better ways to do it than using the Punisher's skull as some sort of strange endorsement of the worst opinions people hold of police--that they take the law into their own hands and can't be trusted. There are countless members of the police who are good people and do care about equality and, "Justice for all," so it is just saddening to see a significant chunk make things looks so sketchy, because again, the Punisher is a bad guy (as I keep saying in this point to drill it in). Let's use some common sense, people. Please?
Posted by David Charles Bitterbaum at 4:27 PM