Some Discussion of a Brief Thought I Had While Reading, "House of X," #1 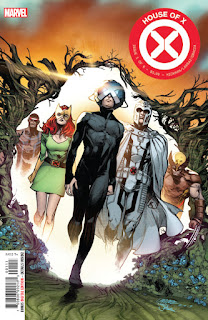 Jonathan Hickman's big return to writing Marvel comics has begun with, "House of X," #1 which will be coming out every two weeks--"Powers of X," will be released in the alternating-weeks until the two intertwined mini-series finish and a bunch of new X-Men books re-launch in October ("Dawn of X,") using Hickman's groundwork as a foundation. Only a single issue has come out so far of Hickman's grand plan, so I am hesitant to offer any sort of review. I will say one brief thought however that occurred to me whilst reading, "Powers of X." It is as such: "This is the biggest re-imagining of the X-Men I've seen since Grant Morrison did his incredible run with, 'New X-Men,' and that makes me excited." Being able to say something, anything, involving the X-men excites me is a big deal.

The last huge X-Men story/run I can I definitively loved would be when Joss Whedon did, "Astonishing X-Men," which itself drew from Morrison's tenure. I liked, "House of M," as its own weird event, but that was more of a big thing that involved all of the Marvel Universe as opposed to being an X-Men-focused event. In other words, it has been awhile since I read an X-Men comic that I loved, and even longer since I was legitimately excited to see what the X-Men have in store for them. Jonathan Hickman is doing his usual weird thing of big ideas, complex graphs, and people with mysterious motives, and I'm down for it. Considering how dull the X-Men have been for years why not let Hickman just draw from a bunch of assorted stories while ignoring the plots or character deaths he chooses to make a new one about the X-men saying, "Screw it, we're making our own country and culture and going to offer humans incredible resources to leave us the Hell alone on an island," at this point when nothing else has been done with the characters of note for some time? The fact I'm excited about an X-Men comic means something to me, namely that Marvel and Hickman must be doing something right.

Side Note: I would feel bad if I did not mention Kireon Gillen was doing some interesting stuff a few years ago with, "Uncanny X-Men," but that petered-out before I could really get pumped for it.
Posted by David Charles Bitterbaum at 2:49 PM