"3D Sweeties" is a Delightful Read 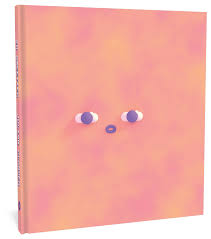 Julian Glander is the creator behind, "3D Sweeties," which collects a variety of his fascinating computer-rendered strips that appeared on various websites over the years (in addition to some brand-new material). The comics have a delicious surreal style, not so much having punch-lines as an off-kilter thematic vibe of strangeness. Whether riffing on ideas of technology-gone-mad, gelatinous blobs getting up to mischief, or exploring the concept of bean bags that actually are full of bugs, it is an equally fun and thoughtful book.

I have a weird sense of humor, so the book really appealed to me with its mixture of outlandish concepts and occasional heart-felt moments. At certain points a general plot seems to emerge with some individual characters, but often there is not a true story-line as much as there is a general sensation of otherworldly oddness. 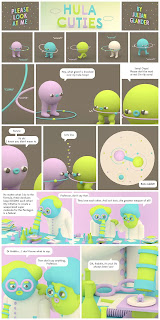 Glander has an art style that looks like a unique mesh of computer-modeling and almost claymation-esque. It fits the tone of the book perfectly, with a slick and wild look. Between the clever writing and awesome artwork I am a huge of, "3D Sweeties," and appreciate how my wife got it for me for my birthday after I told her about my interest in it. I guess she's a, "Sweetie," too! Yeah, that was a bad pun. I apologize, but my point still stands the book is stellar.
5 out of 5 stars.
Posted by David Charles Bitterbaum at 8:19 PM