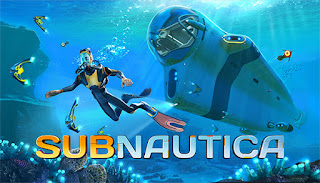 The game, "Subnautica," was in early access on the PC for quite some time, then came to Xbox One as well. I honestly did not realize it had been released for the PlayStation 4 until I saw it the other day as a title available to check-out from my awesome Saint Louis County Library system. As I have a PS4, I borrowed a copy and have been playing it. There are elements I love and ones that I'm just tired of, honestly. You see, "Subnautica," dumps you in a big ocean-planet and then with little guidance encourages you to figure stuff out. This is cool and fosters exploration. It also makes you constantly gather materials and focus on keeping yourself fed--this is less optimal for me.

I love exploring in games and, "Subnautica," is full of stuff to explore. Sadly, to do much exploring you have to slowly, "Grind." Yep, this is one of those games where you start with almost no supplies and have to build-up much of anything to get to the, "Good stuff," of not always being at risk from dying of starvation, dehydration, or lack of oxygen. I love exploration, but having to constantly be upgrading my oxygen tank to be able to do much of any exploring gets old. I know as I advance in the game and start building-up a big base a lot more possibilities open-up, but I honestly would rather be able to just simply explore in a game as opposed to always monitoring vital signs or gathering stuff to make devices so I can actually look around underwater for an extended period of time. 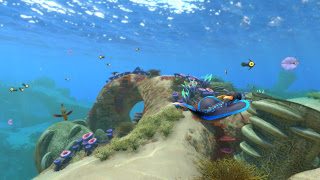 I appreciate the game does have a mode that removes worrying about staying fed or hydrated as well as a version to just build-stuff as well. That said, a main game mode that lets me explore and build without worrying about if I have enough copper ore would be nice. If a game that sounds like it is pure exploration--"The Outer Wilds," ever comes to PS4 that sounds like a dream title for me. For now, however, I guess I'll have to pick at limestone for ores so that I can get to the good stuff in, "Subnautica." That is, if I don't get bored of the grind and quit first.
Posted by David Charles Bitterbaum at 12:18 AM