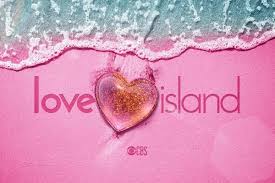 There is a new (to America, at least) reality show that has become a fast favorite of Samii and myself. It is called, "Love Island," and it is deliciously chill. Unlike the current mess that is the, "Big Brother," season or a program a bit like, "Love Island," known as, "Bachelor in Paradise," which also sometimes gets way too emotionally heightened, everyone on, "Love Island," basically is just there to hang-out, make-out, work-out, and have some drinks (within reason, the show does not need a scandal like what BiP had). A huge hit in the UK, "Love Island," is all about couples pairing up--it can a bit heteronormative but bisexual and pansexual folk have been on and everyone is really chill about sexual fluidity and not at all homophobic (such as when two straight dudes chilled in a bubble-bath together last night to no rude jokes from anyone else)--then doing little challenges to win...well, there really is not anything to win. People can vote on their favorite couple in the end and that duo gets to split some cash, but otherwise all the contests or such are just for fun and so people can get to know each other. Everyone just relaxes, kisses sometimes, and it is like being on a vacation for an hour when you tune-in with a bunch of relaxed and moderately horny people chatting around you. Again, it is just wonderfully laid-back.

There is no, "Immunity," challenge to avoid getting voted-off, or special powers. It is just guys and gals choosing to spend time together and because there are always more men than woman or vice-versa, someone ends-up getting kicked-out due to the lack of anyone wanting to mack with them. Some reviewers have said the whole thing is a bit, "Boring, but hard to escape," with even critics admitting this is just weirdly watchable. It is a bit of a slow-burn, but Jezebel sees potential in it. Hell, lots of reviewers find themselves not being sure why they like the show, but wanting to keep tuning in--with it on 5 days a week there is plenty of content to enjoy too. Ratings have been lower-but-steady, with CBS usually being okay with less viewers in the Summer on these shows with lower budgets. I hope CBS gives it time as even the smash-hit UK version which is getting higher ratings than ever took some time to develop a following, "Across the pond," from us. Also, Matt Hoffman makes an awesomely snarky announcer so I am always eager to hear his thoughts on the various scenes of kissing and fondling. In the end, "Love Island, "is just really chill and maybe someone will find love at the end for all we know, or at least lots of heavy-petting and possibly even sex-stuff will occur. Either way, my wife and I are happy to just chill nightly on Love Island as long as CBS is willing to keep the show going--seriously, more people need to tune-in because I want more than a single season!
5 out of 5 stars.
Posted by David Charles Bitterbaum at 6:51 PM