I Was Wrong About a Movie's Box-Office Potential Yet Again 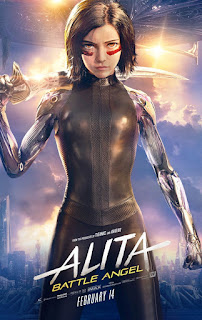 At the end of 2018 I described how my biggest mistake of the year was predicting that the movie, "Venom," would be a box-office bomb as opposed to making a whole lot of money. I just had a post last week where I stated James Cameron was trying to get publicity for the, "Alita: Battle Angel," film he had executive-produced because I and everyone else was convinced it was going to bomb, hard. Well, I was wrong yet again and maybe should quit predicting box-office intakes as besides thinking that, "Aquaman," would be a big hit I've been wrong, often.

"Alita: Battle Angel," is by no means a huge, wild hit. It did place 1st in the domestic box-office this extended President's Day weekend, however, making about $43 million within America if you look at the stats for Thursday showings through Monday. The thing still cost nearly $170 million to make and has had a huge advertising budget, but between a solid first weekend in the US and decent International box-office sales it might very well end-up turning a tidy profit if it does well in China and Japan (it has not been released there yet) and getting a hinted-at sequel made--something I would have thought had the chance of happening of a snowball in Hell last week. 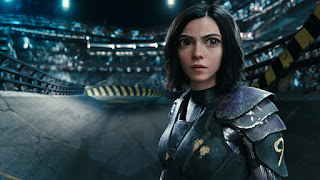 "Alita: Battle Angel," has proven it is not a huge bomb, but it also is struggling to some degree that others would say it is somewhat tanking. Still, I thought it would crater so I have to admit I was wrong to some degree. If in the end it has a quick drop in ticket-sales and inexplicably falters in Japan and China it could very well qualify as a box-office disaster, but the fact it even placed first in America over our combination Valentine's Day-to-President's Day weekend (albeit a modest first-place) is enough proof that as good as I sometimes am at predicting what comic-books will be hits or failures, my track-record with movies starting to look like it ain't that good. At least I can be pleased for the Director, Robert Rodriguez, whom I've always heard/read is a nice guy that simply loves making movies, big-budget like this one or smaller-scale stuff too. I'm happy for him, even if I am disappointed in myself.
Posted by David Charles Bitterbaum at 9:18 AM