Comics and the Tales of Their Owners 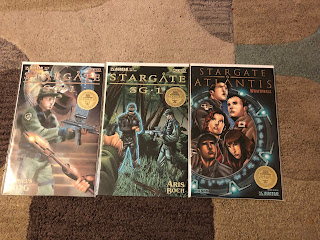 I enjoy going to a popular somewhat-National chain known as Half Price Books. They sell all kinds of stuff, from (obviously) books, to comics, movies, music, collectible stuff, video-games, and are always buying those things from people too. It is a great place to unload your comics that aren't valuable enough to bother selling online because after shipping and fees you'd lose money, in other words.

As I've been selling some stuff lately to clear-out space I would browse the store while they examined whatever items I brought and in that process I stumbled upon some comics that got me wondering if there is an interesting story behind them. On one of the occasions I was at Half Price Books I was rooting through the old comics and found a, "Stargate," book that was published by Avatar Press. This one was notable in that it had a super-limited cover of which only 350 copies had been produced and it was sold exclusively at a comic-convention in Dallas (Texas). Observe a close-up: 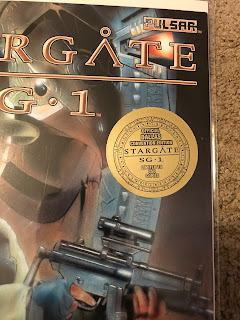 As I have a soft-spot for Avatar Press as a publisher and like snazzy variant covers I picked it up for $1.50 and took it home. I added it to my pile of comics to read and forgot about it. Until, when I was at Half Price books again a week later to unload more stuff and found two other ,"Stargate," comics that also were extremely limited covers, this time from two completely different conventions--one in Arlington (Virginia) and another in Chicago (Illinois). Now, this struck me as odd, and made me imagine there must be a story behind these comics. I sat down, and imagined some things.

Possible Story 1: A young man or woman spends their time going to an assortment of comic-conventions and buying comics related to properties they love. They adore, "Stargate," and basically plan-out their conventions they want to attend based on if Avatar Press will be at a show with the super-rare covers. They buy these comics and treasure them, but something changes in their life--a relationship, a child, an illness, it could be happy or sad--and they need to unload all these comics. Perhaps they look online and see even though these covers were very limited there just isn't much of a demand for them. They sigh and sell these comics along with other stuff they've collected at Half Price Books for a lot less than they must have spent going to all the shows.

Possible Story 2: Someone learns that their relative has passed away. They go into their house and sort through their stuff. They stumble upon a bunch of comics and look online to see what is valuable and what is not. They look at this assortment of rare covers and are convinced this books must be worth hundreds of dollars, only to disappointingly learn they are worth maybe a few bucks each. The comics their relative had worked hard to acquire via either visiting conventions or buying them from the Avatar Press' website (sometimes the company would sell con exclusives online) are unceremoniously dumped at Half Price Books along with the other less-valuable comics while the ones with some worth are put on eBay or on consignment with a professional comic-seller.

Possible Story 3: Someone was sorting their comics and didn't mean to sell these rare variant covers of their, "Stargate," comics they acquired at comic-cons or from Avatar Press and are really upset right now. If that is the case I encourage them to contact me.

A Mystery Without a Doubt
I feel like there has to be some kind story behind these comics and am incredibly curious who put forth the effort to acquire these rare (if lacking in monetary worth) comics and then jettisoned them at Half Price Books. I'm not judging, as I've had things that I once was desperate to own and then shrugged at getting rid of, but I wonder what exactly the tale is behind these books. I may never find out and just have to imagine the scenarios, and wanted to encourage my readers to do so too--or if they know someone in the Saint Louis region desperately trying to find their, "Stargate," comics to please reach-out. For now, it is a mystery indeed.
Posted by David Charles Bitterbaum at 6:42 PM