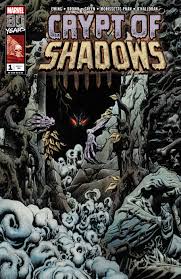 Marvel is celebrating being 80 years old (technically a lot less with the actual name, "Marvel," but counting its years as Timely comics and Atlas we hit 80), and as a part of this has been releasing some cool one-shots themed for their past works and in genres a bit more diverse than they do now. For example a war comic, sci-fi, horror, and some others have come out with other cool stuff on the way too. I have quite enjoyed the books I've read so far, full of today's talent creating stories with an equal mixture of a nostalgic vibe and new techniques, and each book is end-capped with a short article about that genre/type of comic and some examples of the comics in that milieu from assorted eras. They are good fun and make me kind of sad too.

Why do these great comics make me sad? Well, reading all these comics full of subjects Marvel doesn't really cover anymore is a little depressing. Marvel maybe will dip into horror a bit (look at how terrifying, "Immortal Hulk," has been), or do some science-fiction with its heroes, but that's the rub right there--Marvel basically is all about super-hero comics now. We are all aware that comic-books as an art-form have a lot more than super-heroes, but Marvel and DC do still find vast, vast majority of their income comes from comics with people in spandex or capes (DC maybe a little less throughout history with its assorted imprints). Marvel might attempt to occasionally do something outside the realm of super-heroes, but it is a rare occurrence because when that happens these tries at something different get minimal-to-almost-zero sales. 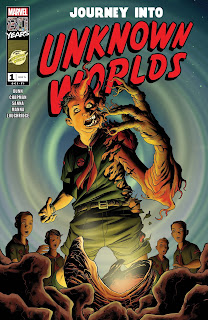 Now, Image comics is of course a big publisher now and does a lot of stuff besides super-powered folk (after all, "The Walking Dead," is often a top-10 comic and has nothing to do with super-heroes) Marvel has found that its attempts to branch-out often sadly fail, and the end-result is a big focus on super-hero comics that maybe poke-at other genres, but still in that wheelhouse of superpowers. These one-shots are exceptions to that usual practice, and the fact they are such good fun paradoxically makes them all the more depressing. Who knows, maybe these will sell well enough Marvel experiments a bit more, as unlikely as that sounds it could happen, right? Right? Sigh.
Posted by David Charles Bitterbaum at 12:46 PM