The, "Magnus the Brave," Kickstarter Looks Awesome and Still Has Some Time Left to Pledge! 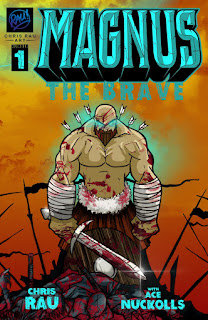 I heard about, "Magnus the Brave," from my chum, Tony, who runs Comics Heating Up. Created by a fellow fan of CHU, Chris Rau, Tony mentioned it to me and readers of his website how it was a cool-looking comic with a Kickstarter that was going on to raise funds. I was intrigued when I heard how Rau does the story, artwork, and coloring, with some story co-writing by Ace Nuckolls, as having a creator who does most of the aspects of a comic is always cool to me in this era where sometimes comic-creation can be a bit fragmented between a big creative team. I had the opportunity to read an advance digital copy of the comic in my capacity as a journalist (that's what I call myself, at least) and was quite impressed. I can see why, "Magnus the Brave," met its funding goal so quickly and has continued to raise money from interested backers!

"Magnus the Brave," is described by Rau as mixing the identity of Conan the Barbarian with Samurai Jack to create a warrior who can fight in a bloodthirsty and viscous manner, but also values peace and introspection. Rau's art style is inspired by a cool mash-up of anime-styled over-the-top action and bloody violence. Imagine if the warriors of old who fought with swords and arrows could also occasionally bust-out a super-powered move full of bright explosive colors and you get the idea of what Rau is doing. The comic follows Magnus as he protects his village from all sorts of strange villains...villains who don't last long. The meshing of the ideas and the weird characters Magnus fights creates something that is original yet also readily appeals to fan of these different style of entertainment. I greatly enjoyed what I read of, "Magnus the Brave," and would encourage you to visit its Kickstarter page while there is still time to pledge (a bit under two days now) and to back it should the comic strike your fancy.
Posted by David Charles Bitterbaum at 3:01 PM