"Heroes in Crisis," #4 is Just Terrible 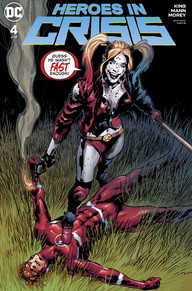 I've already expressed concern with the big DC-event comic, "Heroes in Crisis," in which I discussed how as of the second issue I felt the series was having a problem where,"...it doesn't know if it wants to be a comic that...[is a] thoughtful mini-event or if it wants to be a BIG event comic full of shocking deaths and mysteries." Well, the fourth issue officially was released today, but as it was shipped to stores a week or so earlier  (the holiday seasons makes things ship weird) lots of people were able to acquire copies and mull the book over. I accidentally got it early, having gotten my pull-list from a shop and finding it in there. I read it, and spent a good deal of time thinking it over, and I have to conclude after some days of processing the book, it is just terrible.

I don't know how or why this happened, that, "Heroes in Crisis," is so bad. I mean, the writer of the series is Tom King and he has created some stuff I've absolutely loved ("Omega Men," "The Vision," "Mister Miracle," and so forth) as well as things that are at least decent (his current run on, "Batman," for example). This comic is just aggressively bad that is is shocking. It is not lacking in artistic skill or writing talent, it is competently done, it just is a miserable piece of work. Artist Clay Mann is so poorly matched for certain scenes it is laughable (in a really depressing way). For example, early on in this issue Lois Lane tells Clark Kent/Superman how all his friends are having their sessions at the secret counseling center--Sanctuary--leaked to her in video-form. As they are having this serious conversation she is drawn like this: 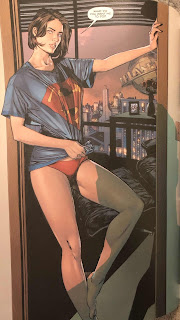 I have zero problem with sexy comics, I have discussed how I enjoy some of them immensely. However, this is a big ol' serious moment discussing superheroes who have been getting counseling for PTSD is occurring with Lois Lane scantily-clad and posing all erotically. It is odd. The whole event has a weird tonal disconnect, and has from the start of the series, frankly. Is this a quiet meditation on the kind of psyches of people who fight crime and how emotionally draining that must be...or is it a murder-mystery comic full of action and titillation? It doesn't know, and in the process the whole book just becomes a slog.

Shortly after the Lois Lane bit we have a moment in the book that should be full of impact and thoughful. We witness Batgirl in one of the Sanctuary sessions pointing at where she was shot by the Joker in that famous story, "The Killing Joke," wherein she lost her ability to walk for a number of decades (in real-world years) before (somehow, I don't know the details) having that injury fixed. It is a quiet moment and very serious before on the next page some super-weird cheesecake art occurs with her and Harley Quinn fighting in a mirror-filled fun-house with some more sexy artwork that makes Batgirl appear to have--as my wife put it when I showed her the comic--"Rocket tits," as in they appear as if they are about to blast-off out of her outfit. Observe: 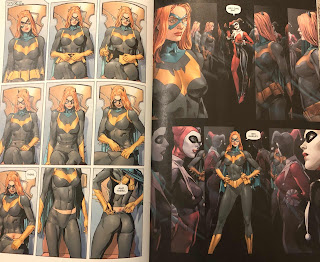 The fight with Batgirl and Harley where they eventually stop their fisticuffs ends in a hokey manner with her talking about how Batman views them both as, "Broken," and just comes off as the most utterly cheesy armchair psychology ever. It is as crass as it is tacky, and not even the most laughably dumb thing in the comic. No, that occurs with Booster Gold and his friend Ted Kord AKA the Blue Beetle.

Alright, so Booster Gold has been captured by Superman, Batman, and Wonder Woman because they suspect he maybe murdered a bunch of people at Sanctuary on his first day, regardless of how little sense that makes considering Harley Quinn was there and clearly smashed him with a mallet whilst making her own escape from the place (my theory: neither is the killer, it is someone we haven't seen yet in the book or some other random hero we have seen but would, "Least suspect," for optimal shock value). Anyways, Booster is locked-up but his friend Ted Kord has come to break him out, because as they say, "Bros before Heroes." Seriously, here: 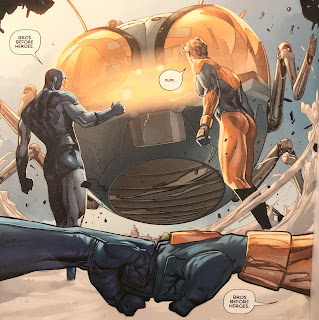 I mean, really? Are we going to do a dumb little joke that plays on, "Bros before hoes," and make it some kind of heart-touching and dramatic moment at the same time? What is this supposed to be tonally? A moment of levity in a book otherwise bathed in blood and melodrama (that still falters at trying to be serious due to Clay Mann's art)? I ask because it doesn't come-off a clever so much as another drab moment in a comic that as I've said, isn't just bad, but aggressively bad. If that is most hilariously idiotic moment though, it isn't the most insulting to readers. That occurs near the end.

On the last few pages Superman tells Batman and Wonder Woman how Lois was having super-hero identities leaked to her. The other two are understandably upset Superman kept this to himself for days, because how Lois has, "Sources," and he respects her as a journalist, which is all well and good but this is the identity of almost every big-name hero in the World being leaked to the media, and Superman basically shrugs it off because even if that seems wildly out-of-character that is what this moronic story demands. He tells Batman and Wonder Woman how she is going to run a story that doesn't reveal anyone's identity but reveals how Sanctuary exists--and so that no one tries to stop it the post went online, "35 seconds ago." 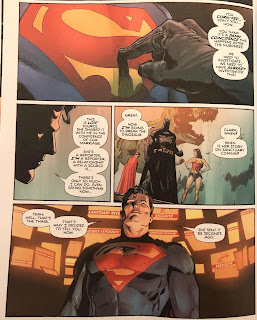 Yeah, Tom King is trying to be clever and have a little allusion to that masterpiece of a comic, "Watchmen," with its famous, "I did it 35 minutes ago." People will tell you how that was a stellar part of, "Watchmen," one that was shocking and full of gravitas...and here feels wholly unearned by the steaming pile of misery that is the fourth issue of, "Heroes in Crisis," daring to think it could measure up to that level of storytelling. I'd be surprised at the gall of King to do this, but after all the other parts of this comic I've talked about being awful it is par for the course with this book.

I already said I don't know how or why this happened, and it brings me no joy for, "Heroes in Crisis," to suck. There have been the slightest glimmers of what could be an interesting comic buried in here, and Clay Mann is a talented artist who turns in some good pages (that opening spread with the graffiti-covered Teen Titans collage is gorgeous), but because both creators are so skilled one can't even give them the benefit of the doubt that maybe, "They just didn't have the ability to pull this off." They have the skill-set, they just really went and done messed up, bad. That is probably the most tragic part of all when it comes to this series. I'm going to pick-up the future issues because I can't take my eyes off a train-wreck of this magnitude. I'm at the point now where all I can do is stand away from the tracks and see how grisly the path of destruction gets.
1 out of 5 stars.
Posted by David Charles Bitterbaum at 10:02 PM