Our Long National Nightmare is Over (Again), Marvel is Killing the Inhumans 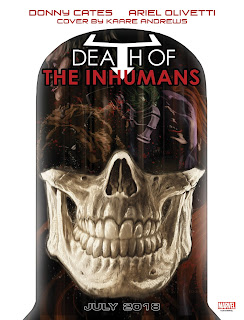 I've been hard on the Marvel entity known as, "The Inhumans," before. While some individual characters are interesting, they as a whole are not. They make decent supporting characters but dull protagonists with only one story ever focused on them sticking-out in my mind as decent--the Paul Jenkins and Jae Lee mini-series from the earlier 2000's. Marvel of course desperately tried to make the Inhumans catch-on and be, "A thing," through various events and mini-series that garnered minimal interest--"Inhumanity," that thing where the X-Men and Inhumans fought, etc. There was going to be an Inhumans movie that got repeatedly delayed, then was turned into a television show that bombed horribly (it looked bad and was bad) and near as I can tell is effectively cancelled after 1 horrifically weak season.

Besides the exception of a few newer characters who happen to be Inhumans--Ms. Marvel/Kamala Khan comes to mind right away--people could give less than a damn about them. Marvel basically was trying to get people interested in the, "Inhumans," because they lacked the film-rights to the X-Men and the Inhumans were a theoretically good stand-in. Marvel is going to be buying Fox now though and reclaiming that property for film, so the Inhumans look extra redundant. Hence, Marvel's going to spare us all any more terrible stories and is killing off the Inhumans--with the exception of the few people like, I imagine.
Donny Cates is a super-hot writer right now who has made a number of great comics at an assortment of publishers and is currently tearing quite the streak of popular titles at Marvel. It was just recently announced that he will be writing, "The Death of the Inhumans," with Ariel Olivetti on art. All I can say is thank God. The Inhumans as an entertainment property is a well that ran dry long ago, a mine that quit giving gold, a dog that stopped barking, and other random weird metaphors for saying, "This shit has gotten old." I truly hope if anyone can wrangle an interesting yarn out of an Inhumans-focused story it is Donny Cates, but even if he can't salvage the Inhumans by killing them off, I'll understand.
Posted by David Charles Bitterbaum at 9:24 AM