The Fantastic Four Are Coming Back in Comic-Form...Yah? 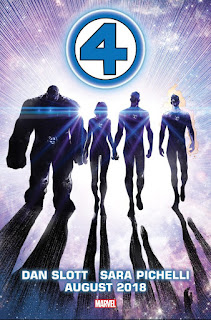 Considering how little Marvel comics I read I sure am reporting a lot about them lately, ain't I? Anyways, hot on the heels of the news Marvel is killing-off the Inhumans they've announced the Fantastic Four are coming back in their own monthly comic. Basically, as soon as it looked like Marvel was going to be getting the film rights back to the X-Men and Fantastic Four from Fox--thanks to Marvel's owner Disney buying Fox--they undid all their efforts to either make due without the X-Men (pointless attempts to make the Inhumans popular) or to spite Fox (discontinuing the Fantastic Four comic).

The new, "Fantastic Four," will be written by Dan Slott with art by Sara Pichelli, so at least it will look good while everyone argues if Slott is a good writer or terrible one as the man seems to strongly divide opinion (I think he's decent). Now its only a matter of time before someone figures out how to make a decent, "Fantastic Four," movie, right? For my money making a flick focused on longtime antagonist Dr. Doom with an off-kilter style via Noah Hawley (of, "Legion," fame) sounds good.
Posted by David Charles Bitterbaum at 9:53 AM