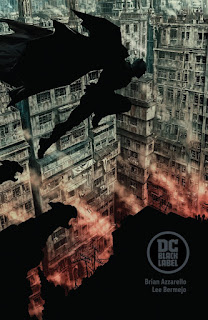 It had been rumored for a bit, but today DC officially announced their new, "Black Label line," of comics which will basically consist of R-rated and potentially out-of-continuity stories featuring popular characters. It is a little funny as back in the day DC's now-basically-dead Vertigo line was kind of an, "R-rated Elseworlds," and the current oft-delayed books in the, "Young Animal," line can be pretty mature what-with the swearing--and let's be honest, this line sounds like an excuse to let Batman say an unedited, "Fuck," and maybe show some illustrated breasts as DC already has shared extreme violence with us in the past via their non-mature readers comics (remember when it felt like every DC book had to feature someone getting an arm ripped-off? Wild times). This whole, "Black Label," honestly sounds like a somewhat dumb idea except for the fact that the announced books actually appear like they could be really, really good.

Putting aside how annoying, "Black Label," sounds as a line name (is DC trying to riff-on alcohol brands to seem extra grown-up?) the creative teams are mostly solid, with people like Scott Snyder and Greg Capullo working on Batman and Brian Azzarello and Lee Bermejo doing a book about the Dark Knight as well,  John Ridley's earlier-disclosed book about the, "Other history," of the DC Universe being a part of this, Kelly Sue Deconnick and Greg Rucka both writing a Wonder Woman title, and, um, Frank Miller giving us, "Superman: Year One," with John Romita Jr. That last one could be good or an abomination (hey, I said the teams were, "Mostly solid," not entirely). 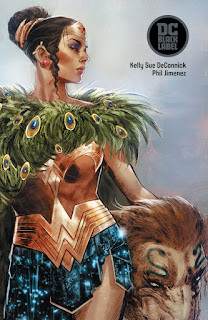 If these titles had simply been announced as general comics that were possibly not a part of the, "Main," DC continuity I would have still been intrigued by many of them. This whole, "Black Label," however sounds like a bland concept--"Elseworlds with boobies and cursing!"--with some potentially stellar content from the creative teams. I'm for sure curious about almost all of the announced books and want to at least give them a shot regardless of if they are a part of this new Black Label, or whatever other line DC wants to throw-out a name for.

Whether the, "Black Label," as a concept is a hit or a miss is really only of concern for me if it possibly means we will get more cool-sounding books announced. If I have to put-up with DC using this dumb new name for a line of really cool comics I'll withstand the idiocy of how it'll sound when I go into the comic shop and ask for the latest, "Black Label," as if I'm ordering a drink. Now we just need to wait for the books to come-out and hopefully be great.
Posted by David Charles Bitterbaum at 3:56 PM