They Don't Ever Call White Men Thugs or Terrorists, Do They? 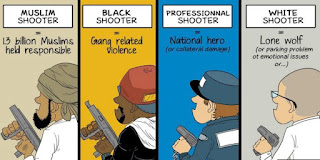 They don't ever call white men, "Thugs," or, "Terrorists," do they? The, "They," in this case being the media, politicians, law-enforcement, etc. A white man can create bombs and kills a bunch of people but he isn't a terrorist, he's someone who is, "Challenged." I would say someone who creates bombs and puts them in random places to inspire fear is a terrorist. A 17 year-old boy who shoots a 16 year-old girl who doesn't want to date him anymore apparently is just a, "Lovesick teen." She was rendered brain-dead and is being taken off life support, by the way. I don't know about you, but a man who kills a woman because she didn't want to be romantically involved with him sounds a lot like a, "Thug," to me. I guess I'm wrong though, because these men were white, so they get the benefit of the doubt.

A black man is killed by the police or frankly any white man and he's judged somehow deserving of the fate. He obviously should've listened to the officer's orders, he was, "No angel," he was clearly a thug, or some other variation of, "He was black, he must have been guilty of something." Meanwhile, a white man shoots-up a school and it is fault of the students there for not choosing to #walkup and reassure the psychopath--good ol' victim-blaming. If a white man kills people it is society's fault, if a man of any other color or ethnicity gets killed it is his fault (and if its a woman, she should've been nicer to the white guy who killed her, but if the man was black he's terrible and she needs sympathy). The white man who murdered innocents was, "Mentally disturbed, picked-on, lovesick, didn't know what he was doing," but the black man who got murdered was, "Clearly in the wrong, should have listened, shouldn't have been where he was." 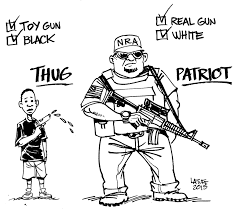 To say America doesn't have a racial double-standard is to tell a big fat lie. Because I'm a white man I could do something heinous and it would be reported in the news like...

David Bitterbaum, a loving husband and father was understandably upset that McDonald's told him there would be a wait for french-fries as they needed to cook more. He responded to this news by becoming blinded with grief to the degree he stole a hot-air balloon and experimental magnet, using them to temporarily borrow (or as some would say, "Steal,") the Saint Louis Arch, lifting it up and relocating it some counties over in the State Capitol, Jefferson City. Mr. Bitterbaum expressed regret about doing what he did and when reached for a comment, Governor Eric Greitens responded, "I don't approve of this young man's actions, but it helped distract the news-cycle from my sex scandal so I'm actually cool with this happening." Mr. Bitterbaum was released from police custody without any bail required and the District Attorney announced there will be an offer of a plea deal of community service that Mr. Bitterbaum can fulfill by teaching a free class about the history of comic-book character Moon Knight at the community center. "We feel he knows what he did was naughty and putting him in prison away from his son and wife just felt mean," was the reasoning given. "Like, McDonald's could have at least offered him a free soda while he waited, you know?"

Meanwhile, if a man of any other skin color did this it would either be reported he was a, "Dangerous criminal," or, "Deranged terrorist," that people want locked-up for stealing the Arch. My example seems silly and over-the-top, but is it really in a world where a white man commits mass-murder in Las Vegas with a bunch of assault rifles and he's described as appearing, "Polite, unhurried, unmemorable," but 12 year-old Tamir Rice is murdered and despite being an innocent child is somehow blamed for his own death? They don't ever call white men terrorists or thugs, but they really should when it clearly applies.
Posted by David Charles Bitterbaum at 11:27 PM