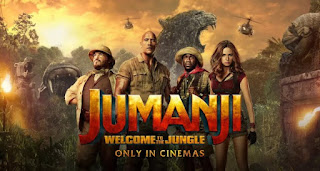 The newest, "Jumanji," film is both kind of a sequel  thanks to a few clever references and clearly is its own standalone entity too. The game updates itself from being board-based to a digital world people are sucked into and hijinks ensue as this time it is a bunch of high-schoolers ending up in the world as avatars quite different from how they are in regular-life. If the actors portraying these avatars were poor the movie would have sucked. Thankfully, we get Karen Gillan, Kevin Hart, Jack Black, and the ever-enjoyable Dwayne, "The Rock," Johnson on the screen for the majority of this flick's just-right running time of 2 hours so all is well.

"Jumanji: Welcome the Jungle," probably struggles the most at the start when the kids who will be sucked into the game are introduced. They fit too easily into annoying cliches--"Nerdy guy," "Jock," "Self-absorbed girl," and, "Smart-but-socially-awkward girl," but that arguably has to be done so that when they find themselves in the world of, "Jumanji," it is all the more funny to see the shrimpy kid turn into The Rock, the tall jock become Kevin Hart, the awkward girl be a fit-and-cute Karen Gillan, and in a stellar performance, the narcissistic girl manifests in the game as a very upset Jack Black. Many of the best jokes come about from her at-first disgust at suddenly being a middle-aged man shifting into a zany joyous self-discovery as she gets used to having a penis (it's just cute and self-aware enough to not come-off as transphobic as I worried it at first might).
There is a plot, involving a gem that has to be put in statue or something, but the main source of entertainment is just watching the four cast-members squabble until mid-way through the movie when (mild spoilers ahead) a surprise fifth-player is introduced and played by a very convincingly confused Joe Jonas who thinks it is still 1996 and he hasn't been trapped in the game for over two decades. That Joe Jonas is actually a decent actor and can hold his own with the other four powerhouses was almost as much of a surprise as him showing-up (kudos to the movie for not blowing his appearance in trailers or such).

"Jumanji: Welcome to the Jungle," is good fun thanks to a fantastic cast and managed to keep me consistently amused. I won't bother trying to compare it to the original as it is its own unique and highly enjoyable beast. The plot may be mostly forgettable, but the back-and-forth between the superb cast makes everything delightfully breezy. It's great fun and easily worth rating 4 out of 5 stars.
Posted by David Charles Bitterbaum at 11:01 PM