This, "Comics Twitter Bingo Card," Is Uncomfortably Apt In a Lot of Ways

The website Loser City writes about all kinds of popular culture including comics and has recently produced a bingo card for us all to enjoy which is uncomfortably apt about the field of comics today. Observe: 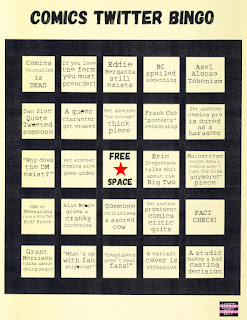 As someone who writes a lot about comics I have both been critical of some of the things listed on this bingo sheet (just stop, Frank Cho) and engaged in some of the activities myself (I once made a post where the whole point was taking-on, "Sacred Cows," of comics). This card is meant more for publishers, but it applies to those of us who do journalism too, as in a sense those who write about comics are a part of the comic-book industry and influence it (or piss it off, as in the case of Marvel probably being none-too-pleased about all terrible reviews for, "Secret Empire," I bet). As the post says though, "It seems like a week can’t go by without the entire comics industry losing their shit on Twitter about something or another," which stings in how true it is. The, "twitter rage cycle," we see in the field of comics is exhausting, with it too often feeling like we are moving from one moment of outrage to the next.

Plenty have argued that with the rise of social media and a 24-7 news cycle that the never-ending outrage we see in applies to plenty more than comics, with the world itself seeming to be in a constant state of crisis due to either terrible Presidents like Trump saying stupid shit, celebrities putting their private business and private-parts out in public, or whatever else it takes to get people's attention and make them perturbed. This comics twitter bingo card could easily be retooled into a bingo card for any huge mess of people getting pissed at one another. It's uncomfortable because it is so true, basically. I tip my metaphorical hat to Loser City for creating something this effective.
Posted by David Charles Bitterbaum at 10:02 AM