Fantastical and Disturbing AKA "Shit and Piss," Comic Review 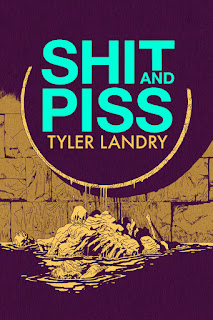 For a book titled, "Shit and Piss," this comic is really good looking--albeit in a disturbing way. The off-putting title belies a highly engaging book that collects all five issues of the small-print book getting wider release thanks to Retrofit and Big Planet Comics. I saw this mentioned on The Comics' Journal website and thought it sounded interesting, so when I saw it at the comic shop the other day I picked it up. The basic idea is that a sewage processing plant of sorts built on a ruined civilization continues to run despite the world apparently ending long ago, and in the process all kinds of horrible things come to life and evolve within its walls.

Landry's writing and artwork gives everything a weird mixture of seeming like half a horror-comic and half a twisted science lesson, as weird strangely-formed and misshapen creatures are birthed and change to try and survive within the walls of the plant. The rest of the world has reverted to a primitive and barbaric state (as we see in the 4th and 5th chapters when humans with barely any clothing or technology are shown outside in the ruins of the world fighting), so in a surreal twist this plant full of waste has turned into the most advanced and complex thing around--quite a marvel for literal piles of shit. 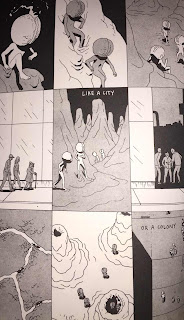 The comic details how inside this world of waste whole colonies and life-forms appear and get wiped out in the span of a day--creatures that work together or quarrel just like the once supposedly more advanced humans. Landry often uses a nine-panel grid layout and will take advantage of this format to cut-between scenes in the present and compare them to other concepts--such as in the above image where weird sewage-creatures work together not unlike humans of the past or an ant colony. As this book is lacking much cheer in its subject matter it wouldn't be a spoiler to say this colony finds itself wiped out by pure happenstance. While that occurs Landry shows his metaphorical examples of all manners of civilization and such falling apart too, as if illustrating no matter how supposedly "Advanced," we are everything can find itself suddenly wiped-out brutally--we all come from shit and will return to shit, basically.

While Landry often uses the nine-panel grid, he isn't beholden to it, occasionally breaking-out of that form to give us a full-page spread of strange creatures, a surreal landscape, or whatever else he feels deserves that entire space to really strike the reader--and there is much to strike us with. The sprawling sewage plant is as imposing as it is fascinating. Landry makes its cramped corridors, rivers of sludge, and dripping pipes all capture a reader's attention as the lifeforms struggling to survive within the plant's walls go about their brutal business of springing to life and ending it. As the mysterious narrator says as a matter-of-fact about something so disturbing, "Down here in the shit and the piss, genocide is a matter of course." 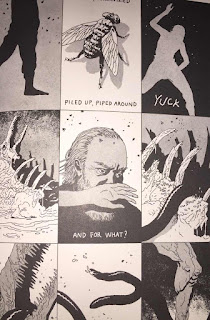 Later in the book when a human from this now-primitive world stumbles into the plant he finds himself taken aback by how despite all this supposed advanced technology life is just as violent and terrible as outside. He asks for what all this exists, why is this here? It is just as miserable a place as outside but with more excess and filth in here, so what is the point? Perhaps there isn't a point, because the book is basically stating for all our individuality, all our so-called civilization, despite any of that, as I said earlier, we end-up just returning to the shit, eventually. It's a morbidly depressing concept and not one I'm sure I fully endorse in its misery, but it still makes a fascinating overall thesis to the book.

"Shit and Piss," is violent, nasty, introspective, weird, and gorgeously illustrated. My copy seemed to have a slight printing error where some pages were upside down (and from the random spots where it happened I am pretty sure this wasn't intentional) but it didn't harm my experience of reading and greatly enjoying the book in any way. I would highly recommend, "Shit and Piss," to anyone who likes philosophy, science, horrific images, or just great comics in general. You can buy it on Amazon

and enjoy it.
5 out of 5 stars.
Posted by David Charles Bitterbaum at 1:52 PM