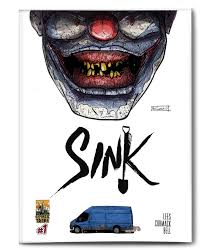 "Sink," finished making clear it was a stellar comic at the end of its first issue when we met the most terrifying clowns I've seen in a comic-book in some time.Clowns, fucking clowns. I don't even have a phobia about them but can admit that I understand why they freak some people out. Even before we're introduced to a posse of violent clowns in a blue van that actually come from a real-life scare in the 1990's that writer of the comic, John Lees remembers well, plenty of other creepy events occur.

"Sink," is a comic series focused on, "A forgotten East End district of a warped funhouse mirror vision of Glasgow, Scotland," known as Sinkhill. You may wonder if it is a pleasant place? Well, "Sinkhill is a hive of crooks, deviants and killers, and ordinary folk unfortunate enough to live among them." Each issue will be its own standalone tale in the region and the first issue introduces us to a variety of folk whom I imagine will pop-up again as the story proceeds. This first issue focuses on a young man named Allan who finds himself stuck walking home late at night/super-early in the morning after missing-out on a variety of transportation opportunities and not thinking to charge his phone enough to keep it from dying. As he proceeds on his jaunt he runs-up against a serial-killer bus-driver whom he doesn't even realize he's narrowly escaped, faces deranged mobsters who wear condoms as headgear (its a part of  a gang initiation), and meets a man who wears a huge fox mask and wields a deadly shovel appropriately named, "Mr. Dig." Oh, and those damn clowns. 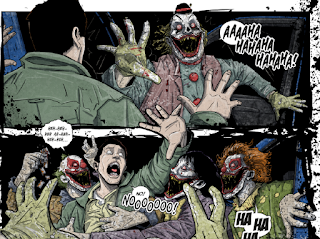 As I mentioned, John Lees' writing gives us quite a scary tale, but what really makes things eerie would be Alex Cormack's moody and dreary artwork that gives Sinkhill an incredibly depressing and uncomfortable vibe. The hideous and misshapen people compliment the atmosphere perfectly, with Allan and his friends looking perfectly normal but as the night proceeds and Allan meets an assortment of twisted figures, the designs morph from regular humans to disgusting and gross beings that look more monstrous than real...which is kind of a given for clowns, but yeah.

In the back-matter for, "Sink," Lees touches upon how he wants his comic to exist on that line between a crime-comic and horror-comic. There are scary and nearly-supernatural elements but also there is an emphasis on the horrific nature of crime. The gang-members chasing Allan down for little more than shits and giggles may look terrifying, but are all-too-human (as Mr. Dig and his shovel prove). There is discussion of class and how Allan may think he's some kind of everyman but clearly is ill-prepared for the kind of rough life faced by these Glasgow residents he claims to relate to. Obviously, nobody deserves to face danger simply walking through a, "Bad part," of the city. It is just as true however that not using your brain and putting yourself at risk because you think you, "Know this area," when you just ride past it on a bus daily to get to your higher-class establishments is a prime example of class-privilege. As Mr. Dig tells Allan upon saving him, "You act like you know Glasgow because you bus in on weekends? We live here. Maybe the only thing making these animals any different from you is they don't have a nice house in the suburbs." 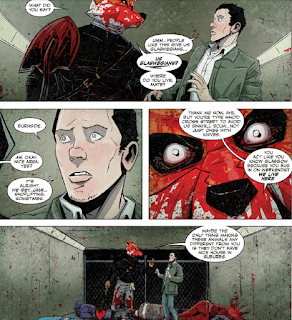 The first issue of, "Sink," is scary, bloody, and has some smart social messages mixed into all the horror and violence. I loved it and can't wait to see what other residents of Sinkhill we can look forward to seeing in future issues. The debut issue of, "Sink," is currently in the July 2017 issue of, "Previews," magazine and you can tell your comic shop to order you a copy for its upcoming September release. I would encourage you to do so.
5 out of 5 stars.