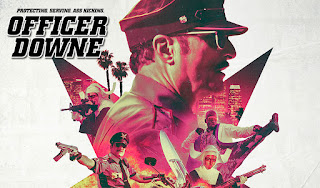 Well, that was terrible. I had read, "Officer Downe," was a bad movie but I didn't think it would be this atrocious. I watched it on Netflix as I love many comics by Joe Casey and he was heavily involved in the production of this film based on his and Chris Burham's book of the same name. I had to force myself to finish the movie after leaving it with 30-ish minutes left a few days ago because I was looking for any excuse to not watch it and instead watch things I actually enjoy. I managed to complete my viewing however by looking for the diamonds in the rough/shit (I'll touch on the couple of bearable-factors in a bit) and there are worse things to have on and struggle to pay attention too when I'm feeding Clarkson his bottle, like an endlessly-looping clip of howler monkeys, or techno-remixes of Kenny G, I guess?

The plot of, "Officer Downe," if you want to call it much of a plot is that a rookie cop known as, "Officer Gable," and played by Tyler Ross is brought into an experimental program within the LAPD that involves reviving a once-deceased officer named Terrance Downe (played by Kim Coates) who goes to kills criminals, dies, and then gets sent out again. In the process he fights against an assassin who speaks English as a weird dub-over for some reason as well as a group known as, "The Fortune 500," which consists of three people who dress-up like animals for no apparent reason and run crime. Already we have a number of questions such as, "Why do they revive Terrance Downe in their program other than he was a great cop back in the day? Is he special somehow?" as well as, "Why is this rookie cop picked for the program?" plus, "Why do the Fortune 500 wear weird animal suits," and of course, "Why am I asking all these questions that will never be answered about a movie that makes almost no sense?"
Multiple times in the movie certain plot elements are brought-up or hinted at and promptly dropped.  Such as if the LAPD is using Downe to eliminate criminals without having to take them to trial, if there are plans to expand this program, if this program has much oversight or is an abuse of power by the LAPD, and a weird after-credits teaser hints that the Fortune 500 might somehow have come out of a different program for...reasons. As I've made clear, the plot is a joke. "It's an action movie though, David, why are you so upset about the lack of plot? Tell me about the action," you may be saying. Well, the action is a weird jumble of quick-cuts, over-the-top and fake-looking gore, and basically gave me a headache with its terrible editing and weird stylistic flourishes (random text imagery or other, "Funny," things) that are more annoying and distracting than clever. This looks like a school project that was given some extra money and they decided to blow the surplus budget on weird lighting and buckets of fake blood.

I've made it clear this movie was painful, but what keeps me from utterly despising it? I said it was a couple things and that is true--it is two people. Kim Coates as Officer Downe and Tyler Ross as Officer Gable actually do a really good job acting and help take F-grade dialogue and make it actually seem a little engaging. Ross gives us the impression of a man who truly is committed to the law, cares about his fellow officers, and wants to make the world a better place. Coates takes a character who is supposed to arguably be a blank slate and gives him enough hints of humanity in some of the rare quiet moments that the dull character of Downe for almost a second seems a little engaging and interesting...before everything starts sucking again. If it weren't for Ross and Coates taking this shit and working so hard to wipesome stink off of it the movie would be a total loss. Without them I truly would have just given-up on, "Officer Downe," and quit watching as there would be absolutely nothing else to recommend this other than that it amused me to see Glenn  Howerton (Dennis from, "It's Always Sunny in Philadelphia) pop-up in a small role with a weird accent. I was so bored I imagined he was actually Dennis playing one of his characters and had somehow stumbled into the movie--I had to use my imagination to stay sane and get through this, as you can see.
When it comes to seeing this movie, all I can say is, "Don't do it." Just go and read the comic the movie is based on because at least that looks good thanks to Burnham's awesome artwork. Some good acting aside, "Officer Downe," is a steaming pile of cinematic garbage and I'm not exactly the pickiest when it comes to movies (I think, "Joe Dirt," is really entertaining). Thanks to two good actors this is barely worth...
1 out of 5 stars.
Posted by David Charles Bitterbaum at 9:14 PM