If it weren't for the retailers who sell comic books--e.g. comic shops--the vast majority of comic publishers would be out of business or making a ton less scratch. Publishers depend on retailers to help promote their books with posters, good word-of-mouth, and they need retailers to order the books (obviously). It isn't always just as simple as putting out a good comic, you gotta have retailers to actually stock the books! Considering how important retailers are it is striking just how poorly some of the bigger publishers seem to at times treat them.

Now, I've been rough on Marvel lately (at least in regards to their comics) but it isn't out of some kind of vendetta, I truly have loved many of their past books and enjoy some current ones.  That said, "Legacy," is a mess and a big middle finger to retailers and readers with re-numberings that don't make sense, stories that seem like terrible jumping-on points and moreso a great time to quit a book, and etc. Marvel's response to concerned retailers seems to have been basically, "Shut-up, you're still going to order this shit so grin and bear it." DC has at times been poor to publishers and at other moments been actually pretty good with nice deals on making comics returnable if they don't sell (the, "Direct Market," comic shops use does not usually allow unsold merchandise to be refunded). Other publishers seem to be a lot better with retailers, with Image seeming to carry on a good relationship with many folk. That said, what Space Goat Publishing just announced they are going to do is an example of how retailers should be treated thanks to their ingenious idea: A Retailer Advisory Board. 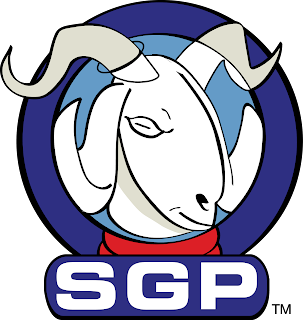 Space Goat Publishing is a comic company that will admit it isn't the biggest or best-known, but has been around for a bit and is, "Scrappy, nimble and sometimes a little stubborn," as the press release about the Retailer Advisory Board discusses. Just what is a Retailer Advisory Board? It is what it sounds like, an assortment of comic retailers (at the moment 15 in North America but I imagine it can grow) who speak with Space Goat Publishing about trends they notice in their shop, what kind of promotions might be wise to do, etc. Basically, it is a publisher treating the very entity (retailers) that keeps comic-books going like the important resource it is.

For their time and knowledge, Space Goat Publishing will reward these retailers with, "Access to works in progress across the entire SGP publishing portfolio, deep discounts and free shipping for all direct orders that meet a modest minimum, participation in group exclusive variant programs, in-book ad pages promoting member stores, customized digital marketing materials, and free mini comic previews of every new #1 shipped at no charge." Those are some cool benefits for sure.
As someone who personally feels that retailers deserve a lot more love from publishers than they often seem to get, this Retailer Advisory Board from Space Goat Publishing seems like a refreshing breath of fresh air. Retailers of course shouldn't tell people what to make or interfere in the creative process by any means, but they can be an invaluable resources for studying market trends, figuring out what people might want more (or less) of, and otherwise are useful and awesome. This is an example of how retailers should be treated, but often aren't. Hopefully it helps inspire other publishers to do something similar.
Posted by David Charles Bitterbaum at 12:28 AM