A Small Number of SDCC/CCI 2017 Observations

San Diego Comic-Con/Comic-Con International has concluded, and frankly not a ton of note occurred. I can really just in a short number of paragraphs say what I thought was at least slightly worth discussing...so I'll do that now! 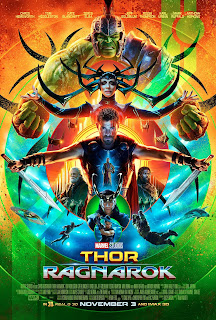 In regards to Marvel and DC, it frankly seemed like Marvel was just desperately trying to convince people, "Legacy," isn't terrible and when that failed simply went, "Fuck it, just enjoy this awesome trailer for, 'Thor: Ragnarok,' okay?" Meanwhile, DC had a decent-looking big trailer for their upcoming, "Justice League," and talked about a variety of stuff but the only thing that really caught my attention was seeing that, "Doomsday Clock," is going to be 12 issues and has a slightly confusing time-concept (which makes sense to mix time with a, "Clock," concept, but still). I'm less excited than when it was a short mini but still cautiously intrigued. Oh, and Noah Hawley of, "Legion," making a movie featuring Doctor Doom is something I'm 100% on board with.

Other stuff that caught my attention was reading that Michael Davis as well as some other friends are launching a comic-thing called, "Level Next," to assist creators of color with the creation and marketing of their stories, which sounds great! Also, after 24 years of being published by Archie Comics it was made public that, "Sonic," would no longer be a property there, before two days later it was announced as being a new property at IDW, so that has got to have some interesting drama behind it. It also sounds like there were some good panels that discussed gender and race in the field of comics.

Besides all that plenty of other things happened, but nothing else struck me enough to feel it was worth even expressing an opinion on (that or something interesting could have happened and I just missed it). It sounds like it was your usual SDCC/CCI--assorted movie and television news, lots of random exclusive comics or Funko Pops, and a bunch of cool cosplay. I imagine it was fun, crowded, and a bit overwhelming for those who attended and maybe someday I'll be able to get out there and report on the show for my blog, even if I honestly NYCC or TCAF are higher on my list of cons I, "Dream," about getting to report on. Anyways, another San Diego Comic-Con/Comic-Con International is in the books, I bet everyone who was there shall enjoy a long nap!
Posted by David Charles Bitterbaum at 5:30 PM