What's that? You would expect if I do a, "Film Friday" segment today, July 14th, 2017, that I would talk about the new, "Spider-Man: Homecoming," flick that came out last week as I'm already delayed with that now? Well, I haven't seen the new Spidey-movie yet but want to, and I did just recently have the opportunity to see, "Wonder Woman," so I thought I would write about it!

Basically, it is good to see that DC finally has a really good film in their Cinematic Universe because dear God did they need one after all these movies that weren't especially great, but were good enough. Also, now that, "Wonder Woman," has made so much money perhaps people will realize girls like super-hero movies too and men are more than willing to see a movie with an ass-kicking woman as the lead. Essentially, director Patty Jenkins just showed us that maybe DC should just put her in charge of their cinematic films because damn did she make a solid movie (and DC rushed to sign her for the sequel after realizing they hadn't already done so). Perhaps the success Jenkins has had with, "Wonder Woman," will show DC they should give their directors space and creative freedom, because Jenkins apparently had to argue for one of the best scenes in the movie--e.g. the bit in, "No Man's Land." 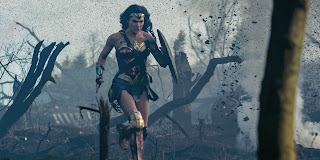 "Wonder Woman," is an expertly plotted and paced film, with it moving from a brief present-day prologue to showing us the origin of Diana in a manner that actually feels fresh after countless origin-stories in other hero-films. We witness her growing from a little girl to a young woman as she trains on her secluded island with the Amazons before World War I comes to their island. This results in Diana going with Steve Trevor (who crash-lands on the island and tells the Amazons of the war) to fight for freedom. It takes a little longer for things to get moving than I would have liked, but once Diana leaves home its great scene after great scene throughout the rest of the running-time. By now most people have seen the film so I won't bother re-hashing all the story-details for you, but I will say I loved the reveal of just who, "Ares," was after it at first seemed Diana's mission to kill the God of War (whom she was convinced had to be behind WWI) was a fruitless endeavor only to have some twists come at us fast and hard. Also, Chris Pine was fantastic as Steve Trevor and I would hope he can return in some manner for a sequel despite, you know, what happens to him at the end. I've said all this and I realize I haven't even discussed how fantastic Gal Gadot is as the titular, "Wonder Woman!"

Gal Gadot was arguably one of the best parts of the so-so, "Batman VS Superman," despite barely being in it and continues to shine in, "Wonder Woman." She plays Diana perfectly and turns a character that at times has struggled to be portrayed well in other forms of media into a fantastic heroine. I personally appreciated how Diana was presented as a perfectly capable and mature woman who just didn't understand certain social-norms, as sometimes adaptation of the story of Wonder Woman for some reason make her seem more like a confused woman-child as she acclimates to the world instead of a smart and skilled warrior who knows how to adapt.
One thing that is notable about, "Wonder Woman," is something a friend pointed-out to me. Namely, we have had plenty of super-hero movies where male heroes are busting through walls or throwing tanks around, but we've never yet seen a female super-hero do so. Yes, we've had films with lady-heroes involved, but not in the manner of them doing everything guys can do, and sometimes doing it even better. It's good stuff.

"Wonder Woman," is a movie that was needed. DC needed it to show their Cinematic Universe wasn't doomed, Wonder Woman needed it to show she was a character deserving just as much admiration as Batman, Superman, etc. and we as a world needed it to show that films with female super-heroes will draw a crowd. Thanks to a solid cast, fantastic director, and a stellar plot (even if at first things drag a bit as I mentioned) and imagery this movie is wonderful, no pun intended.
4.5 out of 5 stars.
Posted by David Charles Bitterbaum at 5:14 PM