The trailer for, "Justice League," arrived upon the internet this past Saturday. I'm finally getting around to discussing it today and don't have a ton of thoughts, but in way that says a lot. You see, I thought the trailer was...good. Not amazing or awful, just good. This is basically how I felt about, "Batman Versus Superman," as well, which many people hated but I found to be solidly entertaining. The thing is, in this era of more and more super-hero movies coming out, is being simply, "Good," going to be enough to stand-out and succeed? Frankly, the "Batman Versus Superman," trailer had me feeling more excited and as I've said, that movie was a solid 3 out of 5 stars (I didn't even bother seeing, 'Suicide Squad," yet). If this trailer only makes me go, "Hm, that seems decently fun," that could be cause for worry, yes?

It is no secret that whereas Marvel has been basically killing it with their cinematic universe and the movies set within it and DC has struggled immensely to establish a good foothold (admittedly, in the realm of television the opposite is more-so true, but this article is about movies). I think things are kind of at the point where if the, "Wonder Woman," film coming out this Summer isn't awesome, and followed-up by a stellar, "Justice League," we may very well find DC's cinematic universe ending with an ignominious death. I really hope, "Wonder Woman," is great because if it is, even scathing reviews and a mediocre performance by, "Justice League," could help the franchise survive. However, if, "Wonder Woman," is absolute trash it could very well poison people against, "Justice League," and make whether the movie is good or awful a moot point. Also, they could both suck and this franchise is completely doomed, but let's think more positively than that. 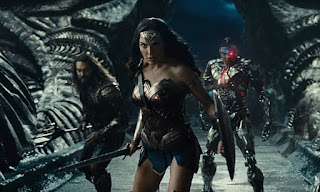 We could get a stellar flick in the form of, "Justice League," and it would be nice if we did. I'll be happy even if we get a production that is all-around good and enjoyable. The thing that worries me is if everyone else will be happy with that, or as my title said: Is, "Good," going to be good enough? Hopefully it won't have to be as that's a bet I'd hesitate to take.
Posted by David Charles Bitterbaum at 10:57 PM