Flashback Friday: What a Difference A Sequel/Remix Makes--Examining Tonal Changes in Entertainment Properties

Changing Tones
For this Flashback Friday I thought I would look at movie, song, and video-game that all had a sequel or a remix that drastically changed their tone. Normally when we watch/listen to/play something we can expect a follow-up to be similar, but with these three properties that came out a bit ago it is fascinating how what came next following the initial property could be related to the original, but oh-so-different. 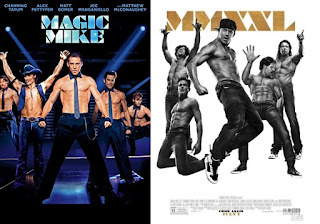 I'll admit the recent-ish ,"Magic Mike XXL," is maybe pushing it for a, "Flashback Friday," but I'm still gonna use it. For real though, despite having much of the same cast and director of the first one (the awesome Steven Soderbergh) being involved in production for the second, these flicks could not be more different than they are. In my review of the sequel, "XXL," I talked about how darn fun it is, which isn't to say the first movie lacks fun...but it is honestly a little intentionally depressing at times. The first movie focuses more on the lives of the men who strip and their drama with family, starting a furniture business, and inner power-struggles among the strippers. The spoof-makers over at Honest Trailers point out this dichotomy between the fun-time stripping and depressing plot quite expertly in their faux-preview.

Meanwhile, "XXL," is basically the fun-time party we all were promised in the promotional materials for the first movie. There is a handful of sadder moments, but overall the whole movie is basically a lot of jokes, sexy men, sexy women, and general good vibes. Both movies are stellar in their own way, but despite, "XXL," being a sequel, it might as well take place in a whole different universe.

Jak and Daxter Versus Jak II 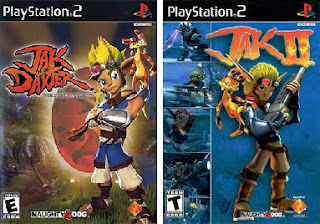 Remember when the studio, "Naughty Dog," was known for their fun little platformer-games featuring Crash Bandicoot and the first, "Jak and Daxter?" It is crazy to think that studio behind silly fun games went on to make such blockbusters as, "Uncharted," and the relentlessly depressing and gory (but also superb), "The Last of Us." Arguably the first hint of their more mature ambitions could be found in the drastic differences between, "Jak and Daxter," versus its sequel, "Jak II." The original game is a cheery adventure set in a peppy world full of bright colors and lots of doo-dads to collect. Also, Jak never talks, because back in the day it was a thing to not have your protagonist speak at all (think of the silent, "Claude," of, "Grand Theft Auto III," or Gordon Freeman in the ,"Half-Life," games).

Then, at the start of, "Jak II," they go into a portal only to enter a really depressing and run-down world. Jak is captured, horrifically experimented on, and gains the ability to speak (and swear). Daxter rescues him and the game then has some of the platforming of the first title, but a lot darker of a tone and now hover-cars you can drive as well as guns (which the first game had none of as far as I recall). So, to review: the first game is a happy collect-a-thon and the 2nd has you stealing hover-cars and shooting guns. To the credit of, "Naughty Dog," both are still very good games and there was even a third one that apparently was pretty rad too (I never played it).

In My Bed Versus In My Bed Remix 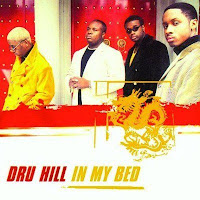 Dru Hill is a Rhythm and Blues group with a great sound that lends itself especially well to sad songs. Member Mark Andrews recorded, "In my Bed," back in 1996 which is a slow and very depressing ditty about how a man's girlfriend is cheating on him. It is melodic, thoughtful, and you can really feel his pain. Then there is the remix with, Jermaine Dupri and Da Brat which features an entirely different beat, melody, sound, all that. Dru Hill turns in much of the same lyrics, but suddenly this thoughtful and slow song about loss and sorrow is a real club banger. Jermaine Dupri has always been great at makings hits so it isn't surprising he creates such a stellar remix, and Da Brat is a talented rapper who turns in a fantastic guest verse as well.

It just is astonishing how different the same song can be with a remix. In fact, both versions of the song had a music video made and they are extremely varied too. The original song's video has a lot of sad staring-into-the-distance, some dancing, and Andrews watching with disgust as his lady sleeps with another man before it closes with him sobbing on the stoop of his apartment complex. Meanwhile the remix-video has everyone looking like they are at a party with lots of cool DJ-equipment, more dancing, and general fun despite the fact that Andrews is still singing the exact same verses about how this woman did him wrong!

Tonal Shift Completed
As these older pieces of entertainment and their sequels/remixes illustrate, sometimes you can have something that is ostensibly related to the original property, but is in fact quite different. Thankfully in the case of these three pieces of entertainment their original iteration is just as great as the sequel or remix.
Posted by David Charles Bitterbaum at 10:15 AM