Spider-Man: Homecoming Trailer Thoughts AKA Another Day Another Preview


God, it seems like just yesterday night I was talking about a movie trailer. Oh wait, that's because I was. Now, not to be a jerk to DC and their upcoming, "Justice League," but Sony and Marvel/Disney seem to really have their shit together with this trailer. Yes, it commits the crime of seeming to show too much of the plot within a short 2 minutes and 30-ish seconds, but lots of previews do that more and more often, so I can't hate. There just is so much good stuff in this trailer too, from plenty of Robert Downey Jr. being a snarky Iron Man, to Tom Holland doing his amazingly-great Peter Parker, Michael Keaton being the stellar actor he always is with an ominous Vulture, and explosive special-effects galore.

Something about this trailer just gets me excited for, "Spider-Man: Homecoming," to a greater degree than any other Spidey-flick since maybe the 2nd original, "Spider-Man," movie which most agree was phenomenal/the best of all the Spider-Man films. I'm not sure if it is knowing that this part of the Marvel Cinematic Universe despite being a Sony production thanks to their deal with Marvel (a deal which is sure to make everyone stinking rich), all the great aforementioned actors, or that we are getting a Spider-Man movie that seems more interested in being fun and focusing on Peter Parker as the hero as opposed to rehashing yet again how his Uncle Ben died and he's all torn-up over it (although if we get a flashback with that I'll be kinda perturbed because at this point the only thing worse than watching Uncle Ben die again would be seeing Bruce Wayne's parents getting gunned down for the umpteenth time). Whatever the reason is this looks so good, I'm just glad it does. 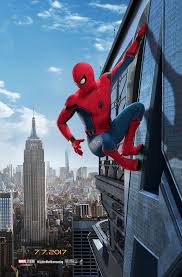 In summary, "Spider-Man: Homecoming," looks fantastic and will most likely be a great time for a variety of reasons as I've outlined above. I'm eager to see it for sure!
Posted by David Charles Bitterbaum at 11:09 AM