The Most Idiotic Thing I've Heard in Awhile? A Con Banning Cosplay 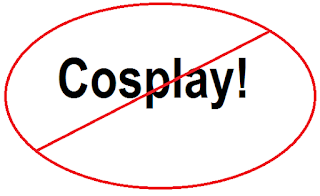 I was doing my usual perusing of news and saw an article on Bleeding Cool about how Elite Con in Florida was not going to allow any cosplaying. Yes, a comic-con that is so concerned about how people are there for collectibles that cosplayers will be turned away at the door. Putting aside how it can be hard to define what exactly would count as cosplay--a t-shirt with a character, a hat, etc.--this is pure idiocy. There is of course the old fallacy that people who cosplay don't buy stuff (they do, that is an incorrect assumption many make), and trying to say you want to keep the focus on all your wonderful collectibles for sale just sounds like you are stating you're the more respectable fan because you simply buy and sell comics, you're not like, "Those people who dress up." Way to try and diminish how other people enjoy a fandom, ya jerks!

Having checked out the show's website it clearly is geared more towards those who buy and sell comics as there is no kind of guest-list featuring creators or celebrities, so I doubt there even would be much cosplay. That said, what kind of perception do you create when cosplay is flat-out banned? As the article describes, they aren't backing down from their rule, but I wonder if enough people express dismay or many refunds are requested if that tune will change. I would hope they allow cosplay, it is such a fun part of cons and it would be a shame if some sticks in the mud try and ban the activity--it's their show though, so they can do whatever they want, no matter how dumb.
Posted by David Charles Bitterbaum at 12:54 PM