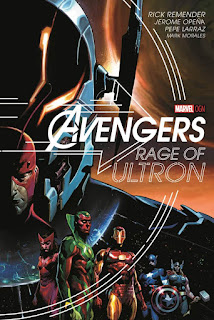 Hey, remember when that popular, "Age of Ultron," movie came out? Yeah, you may also recall that there had been a comic-event of the same name but with a drastically different plot. To fix this issue, Marvel released an original graphic novel  at the start of April titled, "Rage of Ultron," that helps viewers of the movie by being...completely unlike the movies and actually apparently set after an event (Secret Wars) currently going on, making my review not outdated but actually from the future, kinda. Okay?

Yes, it seems after, "Secret Wars," the Marvel Universe is jumping ahead another eight months in its continuity, and, "Rage of Ultron," takes place during that gap. I guess the idea was to lure in fans of the Marvel movies and the latest, "Avengers," flick with Ultron, but I think most folk reading this OGN who have no knowledge of the comics will find it indecipherable.
We have a Thor who is a lady (still a mystery woman when the book came out, but we now know her identity is Thor's on-again-off-again girlfriend Jane Foster), The Falcon is Captain America, Hank Pym features heavily in the comic talking about how he created Ultron even though fans of the movies know Tony Stark as Ultron's, "Father," and Hank Pym as the nice old man played by Michael Douglas. Oh, and Sabertooth is basically there as an apropos Wolverine and no one explains why (it was that "Axis" event Remender also wrote) There are references to other Marvel comics, from some, "Secret Avengers," business that this novel's writer, Rick Remender, did a bit ago with robots, to the Wasp talking about living in another dimension (that was from when Bendis did "New Avengers" most recently, I think).

I haven't even discussed the comic's quality yet--and it's a perfectly decent story with some stellar art--but I just think it is worth discussing that for a comic meant to catch the attention of folk excited about the movie-version of Ultron this comic fails on an epic scale when it comes to being new-reader-friendly. That established, let's discuss the comic itself. 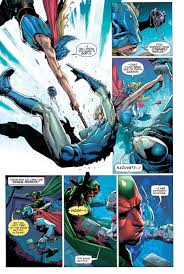 Jerome Opeña is a fantastic artist, there is simply no doubt about that. Rick Remender can be a great writer (just look at "Fear Agent" or his time on "Venom"), that much is clear. That said, you can hear this story groan under the weight on continuity from all the aforementioned plot-points and struggle to tell an admittedly interesting story about concepts of humanity and technology (and how they combine).

It sadly is presented in a bit of a manner that is black-and-white where Hank Pym's argument against evil AI comes off as a jerk-ish viewpoint and the Vison's claims that a robot is just as human as anyone seeming more legitimate. It seems a really out of character for Pym, because most other times I've seen him, he usually is a bit more warm towards robots--I mean, the man led a robotic team of Avengers recently in, "Avengers: AI." It really reads like Remender needed to give Pym a, "Redemption," arc to his story and did it by writing him as horribly off-kilter at first before making him resemble the Pym we know and love (well, some folk love him and others despise the guy).
The overall plot is how we see Ultron and Pym fighting in the past and Ultron appearing in the present to attempt and take-out his Father before Pym successfully stops him by having their psyches and forms become one...or something, its unclear. The ending is a bit of an anti-climax with Pymtron (I think I came up with that) running off disgusted at what he's becoming and hibernating in space only to return next time a comic-event or movie tie-in the story calls for it.

Were it not for the fact that Jerome Opeña is an absolute beast when it comes to artwork this would be a generally average book. Thanks to him though this is a pretty good time. I checked it out from my local library (those are really handy) so I didn't feel like I wasted my time, but had I bought this full-price I might have felt a little different. My suggestion is to give it a read if you have the chance, but only actually buy it if you really love Opeña's artwork or obsesses about Ultron a bunch.
3 out of 5 stars.