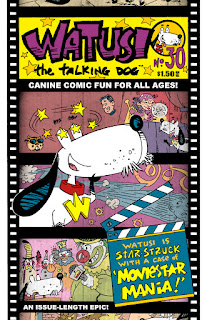 I first met Dale Martin at the Project: Comic-Con about two years ago. He had a contest which people at the show could enter to get a free copy of the next issue of his all-ages comic, "Watusi: The Talking Dog" when it came out (with this series being different from his free webcomic one). As he was busy doing the free webcomic and other works it took a bit, but now he has finished the 30th issue and also emailed me as I actually won the random name-draw! I gave him my information and informed him I wanted to also review the issue, which he told me sounded great.

The comic arrived a few days later and having now read it I can say it was indeed very enjoyable! I like following Watusi's adventures via his comic on the internet, but having a complete story contained within the issue is always nice. The interesting thing with this issue is that Mr. Martin actually had random people contribute story ideas which results in the plot going in crazy directions at points, but to Martin's credit he makes it work out well--even if he admits in the comic's foreward he was concerned the story gets confusing. 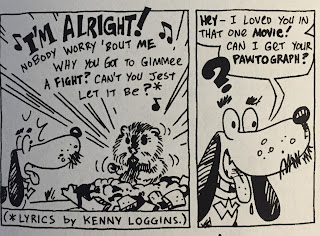 I think Martin is possibly a bit too worried, however, as I was able to follow the plot with all its zany twists and turns quite well. The basic idea is that Watusi meets a movie star known as, "Mr. Gopher," who's theme music makes it apparent he is a humorous reference to the gopher from, "Caddyshack." Watusi then finds himself being sued after actually saving the Gopher's life because if Mr. Gopher is anything, it is rude, unpleasant, and otherwise mean. After that things get crazier with Mr. Gopher's ex-wife breaking him out of prison (when he is thrown in there for contempt of court) in order to pay-up his alimony, a possibly-fraudulent mystic gets involved, someone who looks an awful lot like Bill Murray (and whom is named Murray Williams) appears, with all kinds of funny things occurring before we reach the issue's conclusion.

Dale Martin both writes the story (with some plot contributions from others) and illustrates it, with his art-style being one I like. Its mixture of some character's being more detailed and realistic while others have a more cartoonish look is great. By making his regular human beings look more normal and the animal-creatures silly, Martin creates a cool appearance of general reality and the surreal carefully co-existing in a way the reader will undoubtedly appreciate. Plus, Mr. Gopher just looks snazzy with his sunglasses! 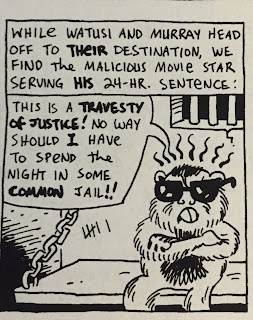 I was pleased that in being an all-ages comic Watusi's adventures are actually fun for all-ages. There is humor kids can enjoy, as well as jokes that are not dirty or raunchy but still easy to appreciate if you're an adult. It's not a, "Kiddie comic," but also could in fact be given to your kids. Were I to have any complaints about the issue it would be that some jokes do admittedly fall a little flat, but enough land that I would say this is a stellar read for you, your kids, or anyone else.
4.5 out of 5 stars.

Should you want to learn more about Dale Martin and his small-press company, Smeary Soapbox Press, follow this link.

PDFs of his titles for sale can be found online too with issue #30 in particular being found here for the price of $1.50 should you desire a copy. Physical copies of the comics can be ordered too, with the link above about Smeary Soapbox Press giving the details on that.

Side-Note: A copy of this comic was provided for free due to my winning it in a contest. I chose to review it for fun. Just like to always disclose that sort of stuff about copies for review and such!