Thoughts on the Card Game Funemployed

I think the creators of Funemployed are probably sick of their game being compared to Cards Against Humanity--even if a variety of those comparisons proclaim their game better. That said, I'm gonna compare it, so here we go... 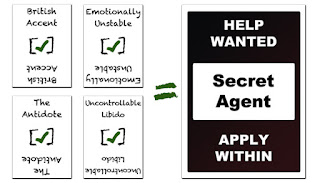 You see, a person gets their qualification cards randomly and depending on how everyone is playing someone can trade a few out or is stuck with their hand. From this point they have a short period of time to think of a speech and then they say their monologue to the person sitting out and after everyone speaks the person with the best speech is deemed the winner of that round. After a number of rounds a winner is crowned, but as with CAH it is more about the fun of playing as opposed to actually coming out on top. 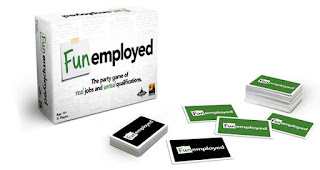 The twist that makes all this extra fun is that a player has to be creative and take the random cards they are given to make a presentation of sorts that could be as polite or dirty as they want. Now, the caveat applies that if someone feels they aren't creative or gets nervous about public speaking (even if it is just some friends) than a game can go horribly. However, you get some folk to just have relaxed fun and it can be hilarious.

Thanks to how it requires not just shocking cards but also a modicum of creativity, I would say Funemployed is a card game that can easily be enjoyed by anyone, and if you really want to make things wild you can always mix in some of your CAH cards--I would call it, "Cards Against Employment," or something like that. Should you want to learn more or buy a copy for yourself Urban Island Games is the creator and their page for Funemployed can be found here, with Funemployed also being purchasable on Amazon--with a fun "Seasonal" expansion pack available too!
Posted by David Charles Bitterbaum at 1:05 AM

Email ThisBlogThis!Share to TwitterShare to FacebookShare to Pinterest
Labels: board games, Cards Against Humanity, Funemployed