Contribute if You Can 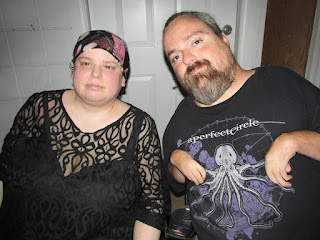 I am a fan of Larime Taylor and his work. A comic-creator who draws via his mouth due to having a disability that results in limited use of his hands, he has created the comic, "A Voice in the Dark," which is a series about a female serial killer that has a superb mixture of dark humor and suspense-thriller aspects. I supported his Kickstarter campaigns for the comic before it was picked-up by Image's Top Cow label and try to follow any updates he puts out about what he has going on in life.

Therefore, I was saddened to hear that his wife Sylv has cancer and despite being able to have the tumor taken out thanks to emergency Medicaid is unable to have insurance of any sort cover chemotherapy due to their having low funds and her citizenship status being a complicated issue (she was born in Canada). Upon seeing he had a GoFundMe going to help cover the costs of her Chemotherapy I contributed and would encourage you to do so also. As someone who just got married to the love of his life (a week ago today!) I wouldn't want anyone to lose the love of their life, especially if via contributions they could have a fighting chance.

To learn more about the challenge facing Mr. Taylor and Sylv, or if you are considering donating money, visit their GoFundMe page here.
Posted by David Charles Bitterbaum at 10:50 PM