Iron Man, Minus the Moral-Compass 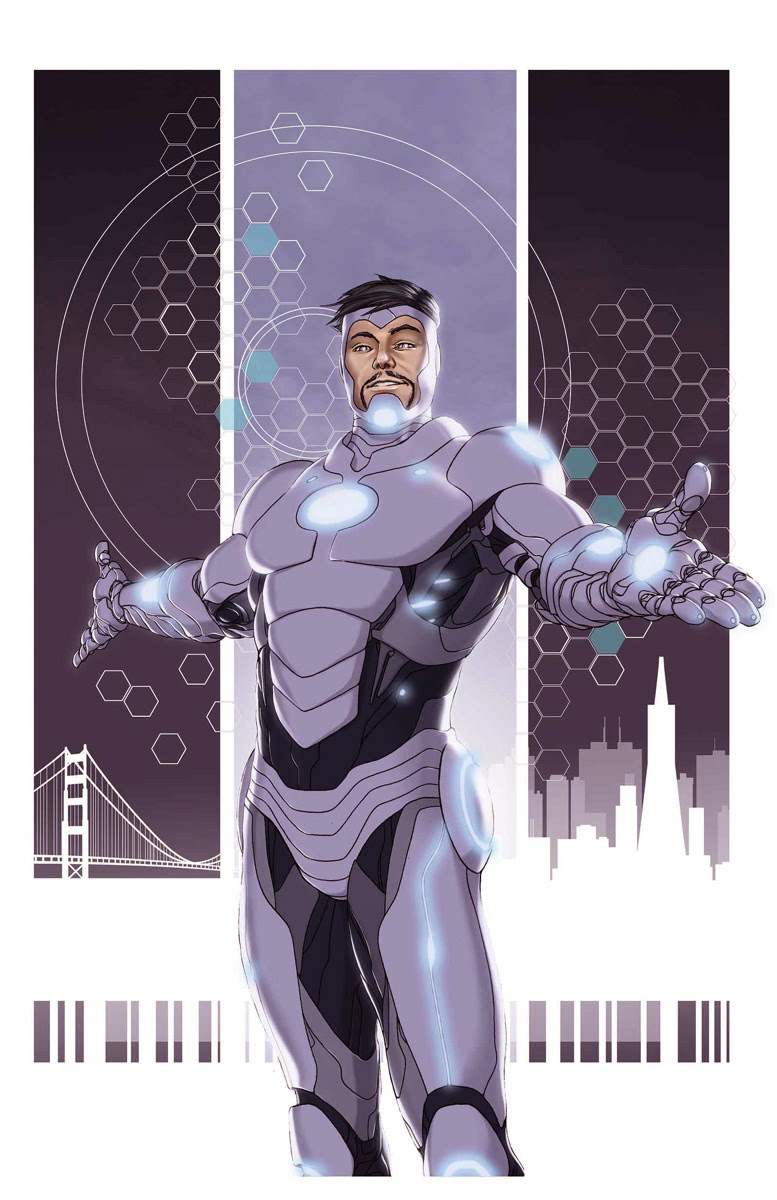 "The Superior Iron Man" is a series written by Tom Taylor that has had a variety of artists contributing a solid look. It is a fascinating comic (that admittedly started slowly but now is firing on all cylinders) in that it takes Tony Stark and essentially amps-up his less desirable attributes to absurd levels. He's still a genius, but now he's self-absorbed, thinks he's better than everyone, and still wants to save the world, but has methods for doing so that are dangerous at best and evil at worst. Basically--as the letters section mentions in the seventh issue--taking the swagger Robert Downey Jr. brings to the role, but leaving out the personality element of actually caring about people. So yeah, Iron Man, minus the moral compass. It makes for a Tony Stark who truly does think he is superior.

How did we get to this new, more self-absorbed Iron Man? Well, the series has made allusions in the earlier issues to the fact that Tony Stark had his personality warped (readers may recall the mostly unremarkable "Axis" event that made heroes kind-of evil and villains sorta good) and it has stayed that way even if most other folk reverted back to their original personality. Thankfully, one does not need to have read that event to follow-along with this series. This Stark is not one we empathize with, it is one who disgusts us but at the end of the day we kind of envy. Yes, he's a jerk. Yes, he's rude and believes he's smarter than everyone else. Oh, and yes, his "Ends justify the means" way of thinking is arguably dangerous, but man if this Tony Stark isn't a hoot to watch with his wild actions and even sharper-than-usual wit.

The series opened with Stark relocating to San Francisco and debuting a new "App" that allows anyone who uses it to have their genes essentially altered by Extremis to have great health and look gorgeous. The problem is this app costs a lost of money, and has led to an uptick in crime. 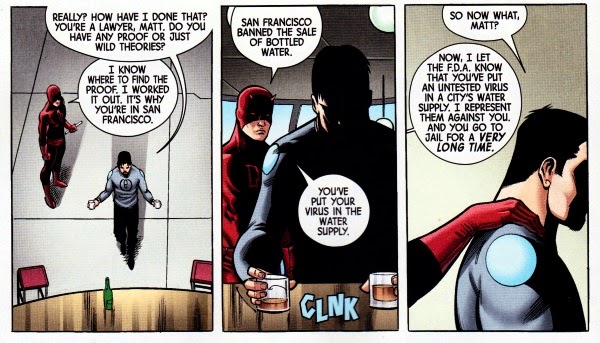 From this problem we saw Daredevil/Matt Murdock enter the scene, be teased with getting his vision back, and then the arc ending with Tony wiping his friends mind of a shocking discovery about the app (it doesn't really do anything, Tony put Extremis in the water supply). This sounds harsh, but Stark could have let Matt fall to his death at one point and that twinge of humanity maybe left in Stark resulted in him saving his friend's life.

It is actually those little hints that Stark isn't all bad that keeps him from appearing to be a villain, even if he is clearly not a hero.

Not Quite a Villain. Definitely Not a Hero. 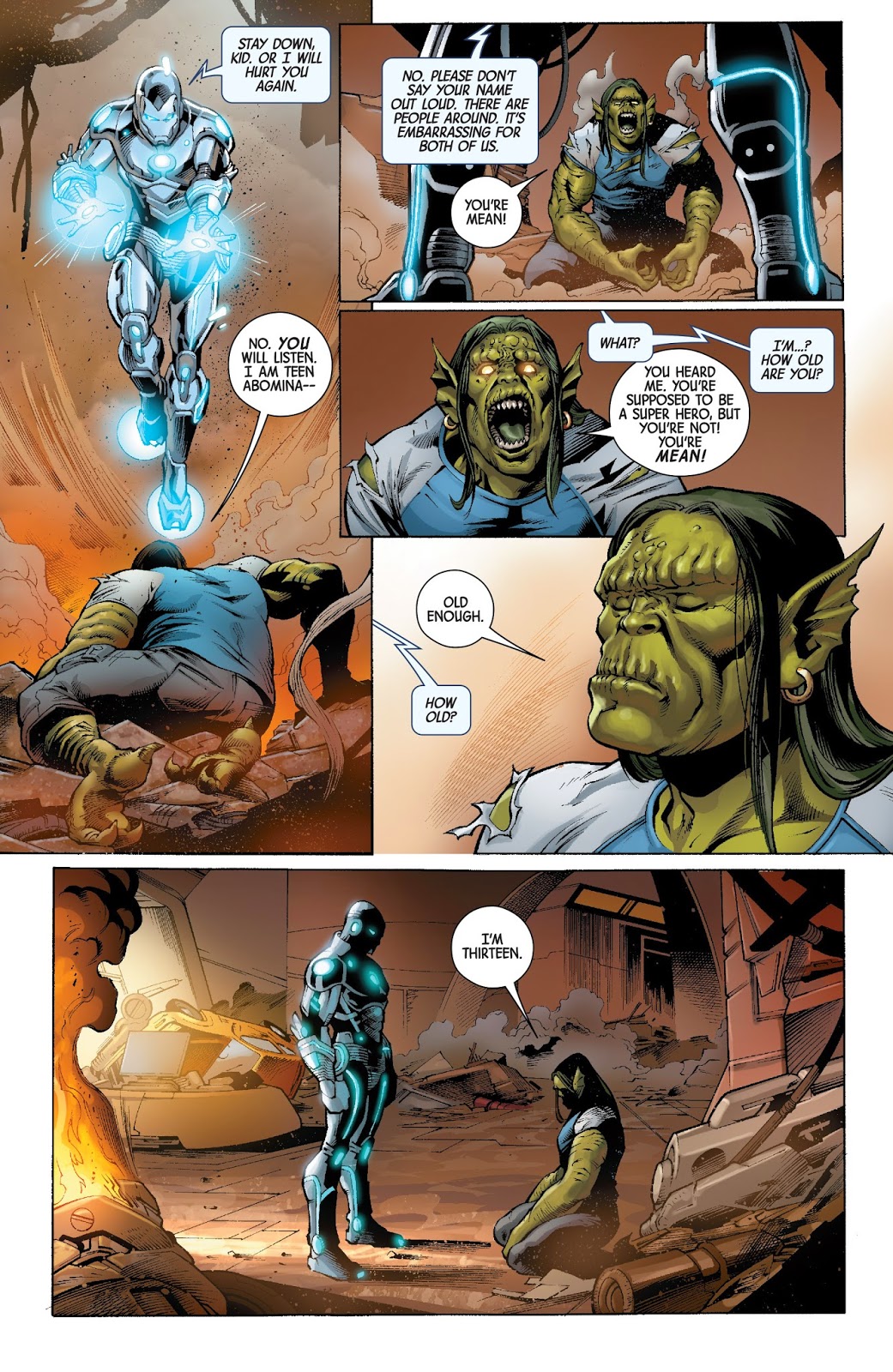 Early on in the series we are introduced to "Teen Abomination," a young monster-boy named Jamie who keeps trying to attack Stark until Tony finds out he is just 13 and has a recently deceased Mother. Tony says he'll help Jamie but later fully admits he was thinking of just taking advantage of Jamie's condition and how to make money off of it. That was his plan at least until he discovered the boy's birth-father happens to be none other than Stark's close friend Happy Hogan, who died not too long ago. With this Stark says he actually will help Jamie, as that friend was one of the few people he maybe truly cared about. Again, not a hero, but not exactly a villain.

Things get even more interesting in the most recent issues, where it is revealed how Tony's on-again off-again girlfriend Pepper Potts has been working with a computer back-up of his mind in an effort to possibly "fix" him. The thing is, even this mental back-up of Tony poses a danger to society, and with the end of issue #8 it appears the real Tony is going to take some extreme measures to make sure any plans he has to improve the world are not disrupted. 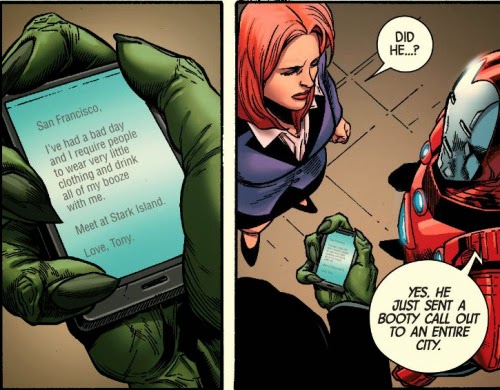 This involves Stark appearing to use mind control on a local partying-populace so as to fight against robo-Tony. Okay, that is actually pretty villain-like, but it still makes for good reading regardless.

Do We Love the Bad Guy? 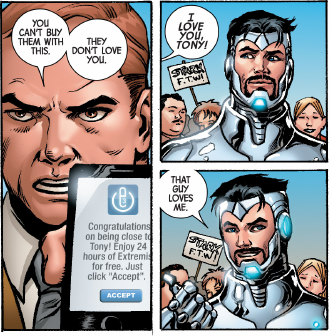 Thinking about how much I've enjoyed "The Superior Iron Man" got me thinking about the last time I really enjoyed a Marvel comic that focused on a less-than-nice main character. That was when Rob Williams expertly wrote about Wolverine's son, Daken, up until killing him off in the series finale...well, seeming to kill him off as then the character popped-up in other comics only to eventually die--and now apparently be alive again or something? I don't know, I just like to pretend Marvel left Daken alone after Williams.

Anyways, even though they behave like horrible people, I find myself fascinated by these "heroes" who are mean people, but know it too. It just seems that seeing a "hero" behave in ways that are un-hero-like may not be new, but them feeling little remorse about it is something seen much less often. Plus, those small hints of Tony still being a nice human (saving Matt's life even if he mind-wiped him, helping Jamie/Teen Abomination as a tribute to Happy) keep him from being completely horrendous. 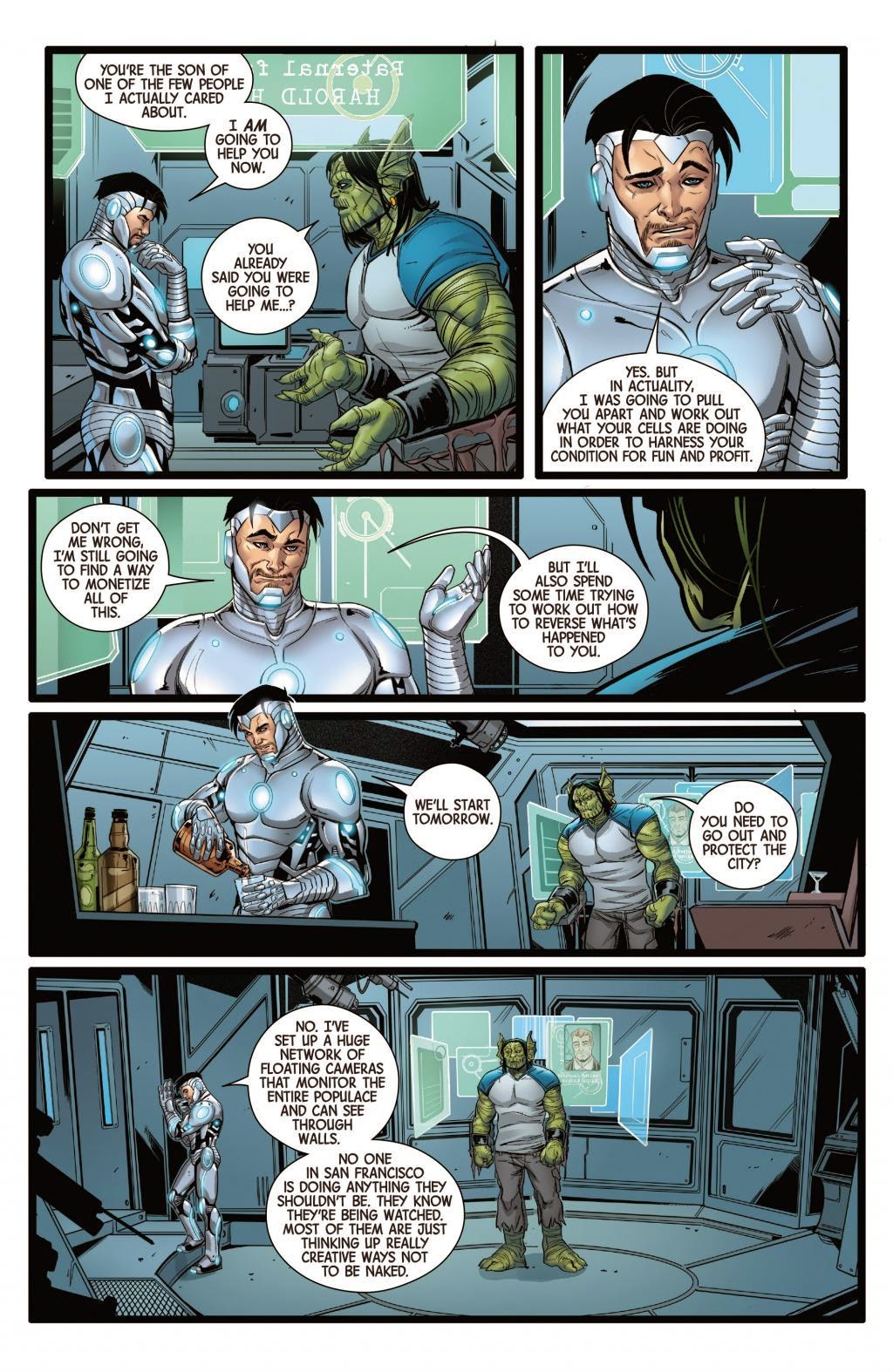 Tony Stark wants to save the world, but to make sure nobody can stop him hopes to buy a media empire. That's pretty wild and shows how there are anti-heroes who are all conflicted about what they do, but when you get someone borderline-evil like Daken or this Superior Iron Man who don't care they're bad people, well that is just intriguing. Stark knows people will be mad at him, and he doesn't care as long as he can control the media to keep them quiet. That's a bad-guy move, but also pretty ingenious and fun to read about.

This all begins to raise the question of if some of the, "Ends-justify-the-means," heroes we worship such as Batman are really that far removed from these so-called heroes who also go about things in questionable ways, but instead of feeling all dramatic about it just shrug their actions off and go have a drink (the newly Superior Tony Stark definitely has broken his sobriety).

The current Superior Iron Man is not the Iron Man people know and love, and even though I find him really interesting the world may not be long for this Tony Stark considering how Marvel is looking to really shake things up with their "Secret Wars" event. Still, I really have enjoyed this series about a less-caring Tony Stark, and when it ends relatively soon will look back upon it with fond memories.
4.5 out of 5 stars. (for the overall eight issues).
Posted by David Charles Bitterbaum at 12:12 AM