The Original Was Great
I loved "Hot Tub Time Machine". Every single guy in the gang of troublemakers who traveled through time was absolutely hilarious, the supporting actors were stellar too, and it was just all-around a fun time. While not initially a big hit in theaters, it grew into a cult-favorite and I was excited when I heard about the sequel. I mean, most of the cast from the original, the same director, it should be just as good if not better, right?

A Sequel In Search of a Plot 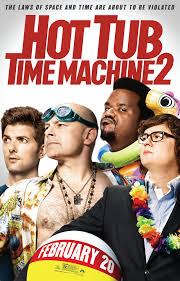 "Hot Tub Time Machine 2" is not nearly as good as the first. The biggest problem is the movie really feels like they had written more than half of the film thinking John Cusack would be in it, but then it turned out he didn't want to take part, so they had to scramble and come  up with a whole bunch of mediocre filler jokes and throw Adam Scott in as the son of Cusack's character, living in the future.

Ah yes, you see the plot--as much as one exists--is that Rob Corddry's character, Lou, and the gang have altered time with their meddling due to knowledge about the future, and someone wants to murder Lou, although considering how many enemies he has the list of suspects is long. Still, they need to figure out who it is in order to prevent the murder from occurring, which results in them traveling to the future...or something. Clark Duke's nerdy character attempts to explain it, but everyone just makes fun of him by singing about how he is a nerd--which is actually one of the funnier bits in the movie.

It's a pretty straightforward idea, a murder-mystery with a murderer from the future. The problem is the movie decides that only provides a bit of material, and therefore wanders off into riffing on ideas about what television is like 10 years in the future (its a lot meaner) and making a bunch of jokes about men being forced to have virtual reality sex on a television show--a segment that ends up going longer than it needs to be and it really is more uncomfortable than funny with it just being a, "Gay-sex is funny!,"-style joke. Yeah, I would like my comedy to be more than gay panic material. True, the first movie had its share of that, but it just feels absurd here.

Also, there is a subplot about a car that wants to murder Lou, but it kind of simmers in the background only becoming relevant at brief moments when doing so fits the story. Other than the gay jokes there are some general sex jokes, gags about getting messed-up on drugs, and a fair amount of slapstick. Its all passable, but this is one of those movies where if you've seen the previews you actually have seen almost all the good stuff.

Speaking of that, "Good stuff," there are a share of funny jokes, and even some of the less-funny stuff survives because these guys have some amazing comedic chemistry. Whether it's Craig Robinson, Clark Duke, and Rob Corddry all making jokes about how their future selves look, or all looking at the camera in a sarcastic 4th-wall-breaking moment when someone says, "Hot tub time machine too (they say it like "too" but the joke is how it sounds like "two")," they all just are so great together. I didn't mention Adam Scott because he kind of struggles to really integrate himself in the group, with half of the reason for that being that the movie is wanting to portray him as a bit of a square, and the other half being he just doesn't bring that mellow charm Cusack has (which makes Cusack so enjoyable and an actor I quite like).

Really, Gillian Jacobs as Scott's fianceé provides funnier jokes than he does, and she gets much more minimal screen-time. Speaking of folk who aren't in the movie much, Chevy Chase barely appears enough for it count as anything more than a cameo, so if you're a fan of him, temper your hopes. There is chemistry and some jokes are funny, but having chemistry can only take you so far, and when your movie is flailing about for a plot, merely having an occasionally funny joke to fill your 90-ish minutes results in a lot of dull moments. 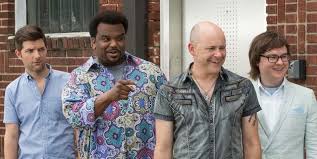 Therefore, "Hot Tub Time Machine 2" is not really a movie you just watch, so much as something passable you can throw-on to play in the background when you're sitting about and want something to chuckle at occasionally while fiddling with your iPad. That way you can look-up for the good bits and otherwise ignore the many dull moments, instead finding a good new stew recipe on Pinterest or such.

The original movie is a classic, and just like how Clark Duke's character talks about the possibility of alternate realities, I bet there is a Universe out there when Cusack was in this sequel and a much better movie was made. Until we all get our own hot tubs capable of traveling through time or realities however, we're stuck with this version, which I award a middling...
2 out of 5 stars.
Posted by David Charles Bitterbaum at 8:30 AM