Earlier tonight I attended the Wizard World Kickoff party. It took place the "Hard Rock Cafe" at Union Station and was quite fun! It was not just for press, with a bunch of people having bought tickets to see a Q&A with Christian Kane as well as an acoustic set performed by him and a member of his band.
Both a musician and actor, Kane has most recently been getting popular for the television show, "The Librarians," which I have not seen, but based on how many excited fans he had (they call themselves Kaniacs) I assume it is a fun program.

Also in attendance was Victor Dandridge of small-press publisher Vantage: Inhouse Productions as well as Rob Schamberger, an artist known for his paintings that relate to the WWE. Both were very nice and fun to chat with. I also saw popular tattoo artist Chris 51 at the party, but was unable to find a chance to chat with him. 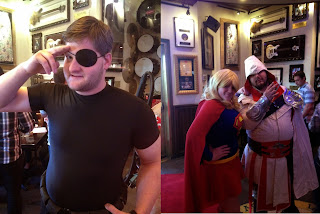 I spoke with some of the members of the Gateway Superfriends, a popular cosplay community that started in Saint Louis during 2012. 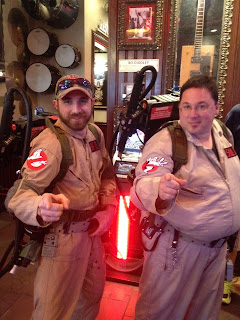 The Gateway Ghostbusters were there too!

All-in-all it was a fun event and has me very excited for the fun I'll have at Wizard World Saint Louis tomorrow!
Posted by David Charles Bitterbaum at 11:58 PM